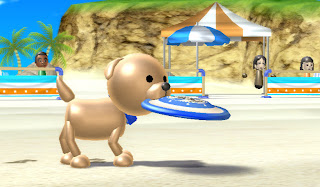 So last night D and I went to see MGMT while K had a sleepover at A's house. In the morning I was anxious to see her, I hate not seeing her beautiful face in the morning. I also could not get out of bed. Standing for hours in six inch heels is not something I recommend. It wasn't because I wanted to look hot, (that's a lie, I just I wore them for that reason yesterday!) I needed the height to see. They helped too, I was able to see better than if I wore my usual black boots, so what if I had to pay for it the next day. So what indeed. y neck, back and feet were killing me. I couldn't rush to get to A's house, I had to get there slowly. When I got there K was less than thrilled to see me, I just love to see her unhappy face when she greets me. If I had the strength I would have just thrown her over my shoulder and put her in the car. Instead I melted into A's couch and stayed there for a couple of hours. While I was vegging I watched the kids play Wii, K was wakeboarding and it looked like fun. After a brief lesson from the six year olds I was no longer old with back pain, I was ripping it up on the ocean. I needed this game.

On the way home we had to make a few stops, one of them was Best Buy, I really wanted this game! We did food shopping and picked up a few other things and headed home. I could not wait to play all the games! We didn't have too long to play though, K had to go to karate. She still on hold for most of this week and has a shoot on Thursday, so we're doing karate when we can. Class was great just a ew kids, K had her own sensei, I love that. After class we took off instead of the usual chit chat. I had games to play!

We had dinner fast, I wanted to show D our new game. K impressed us both with her wicked sword fighting skills, she won 10 out of 10 matches. Cool. We put K to bed and had some intense table tennis matches. I knew my arms would be sore in the morning, it was quite a workout. I keep forgetting how much I love these games, for the most part they double as my workout since I hate the gym. I only hope that when I wake up it's just my arms that hurt.