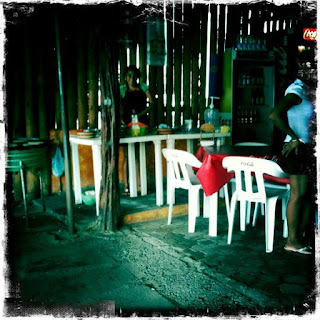 Another late start which was fine since it seemed to be a bit overcast, we took our time and had our fruit, coffee, yogurt and cereal. We were less than thrilled by the restaurants here at the resort and knew we would be too tired to venture out after a day at the water part so we switched it up a bit. I suggested a bigger meal for lunch and a quiet dinner in the room We knew we needed to go back to Walmart to get more bacon (we have become used to it as a morning staple) and a few other things but this time we would find a new driver and ask to go to a real local place, we found one quickly and after some master negotiating by my husband the plan was set. Carlos was going to take us to his local favorite spot, wait for us and then head over to Walmart and back to the resort. I wasn't too worried just skeptical, he parked in front of what was literally a hole in the wall. The look on D's face was priceless, once he saw the woman making tortillas in the front he knew we were in the right spot. Not one person spoke English but with some pointing and guessing we placed our order. All I'm going to say about the food is that we are going back tomorrow and Thursday, it was that good. We ordered so much it became our dinner as well. Walmart was Walmart, except everyone kept looking at us, we are clearly not local, it wasn't a bad thing, everyone smiles at us when K is around. Even the Policia in front of the store went and fetched a cart for us gringos. We were quick this time and made it out pretty quickly. We came back changed and went to the waterpark for a while and then the rain came again, we went up to the room and played in the plunge pool on the balcony. We also went to the cyber cafe for a while to check emails. K is supposed to work a job out of state and I wanted to make sure I didn't miss anything, I didn't. We also needed some Splenda for my morning java and one of the restaurant hostesses happily supplied it. We had dinner in bed and watched Iron Chef in Spanish. I have to say that all the reviews I read about this paid off, I was armed with a ton of knowledge and plan to write my own review on Trip Advisor when we return.

What I don't get was all the reports of bad treatment by the staff, I have to say that we have been treated like royalty from the second we got here. The staff is not only incredibly nice but I have to say way nicer than most of the guests, most of the people here blow, and there aren't that many Americans here. I can tell you that out of the Americans here we are the only ones who have ventured out besides the traditional Walmart trip, they all do that. I want to go to the Acapulco Princess before we leave, my grandparents used to stay there and I hear the food is good.

Now I'm off to my balcony to enjoy a cocktail or three.

Kabooooooooooom!!!!!!!!!!!! This morning we woke up to the longest thunder I have ever heard, I thought it was a really loud maids cart but a few minutes later I saw the flash and heard it again. I wondered what we would do if it kept up. We stayed in bed for a while and the storm passed. We had our usual breakfast and took our time. It was still cloudy when we left but the waterpark and pool were already bustling and the weather was lovely, clouds never bothered me. D and K convinced me to finally go down the biggest of the slides, I was reluctant but gave in. It was awesome. A few hours of family pool time was interrupted by work (boo!) and D had to leave for an hour (BTW, an hour in D time is like 3 hours in real time). K wanted to float around the lazy river so we did that, for hours. Actually K floated, I held on to her inner tube and pushed her when she wanted pushing and kept her from the giant bucket waterfall that was scary and awesome at the same time. After that we did more sliding and then more river. I was exhausted when D finally returned. He came back just as K was making a new friend, a 9 year old girl who lived down here and used the hotel pool for fun. The family was cool and they all spoke perfect English. K is planning to hang with her tomorrow.

We made it back here and went to finally eat at about 8:30, we decided to give the resort restaurants one more chance mostly due to laziness and my inability to deal with a driver. Score, the meal was awesome, authentic Mexican food and some really great beer called Victoria, we'll be looking for that at home.

I was glad to have good food without the driver bullshit. We'll have that tomorrow when we get Carlos to take us back to the local place we went the other day. Oh yeah, the lazy river washed away my sunscreen and I am a whole lot darker than usual, and of course I was wearing my sunglasses so I have raccoon eyes. Pretty!
Posted by MicheleB at 10:35 PM