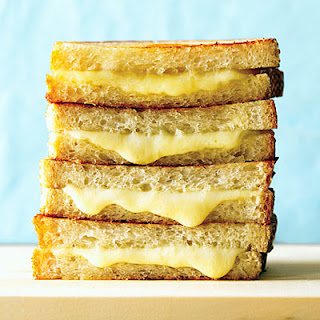 So K isn't working today, we sort of planned on her shooting either today or tomorrow and made no other plans which left it free! I decided it would be a great day to introduce K to Brie. Don't know Brie? How about her proper name, The Grilled Cheese Truck? It was going to be parked at noon in West Los Angeles for lunch and we were going to be there. I posted our intention on Facebook and off we went.

K was so excited, she's heard me talk about this for months and was finally going to have "the best grilled cheese ever." The traffic sucked (duh) and we were a little late, the line was there but not too bad, we even got great parking. We stood for a while and the line grew, K could not believe all these people were standing around waiting to overpay for a cheese sandwich. We discussed our options and K chose the truck special: Cheesy Mac and Rib, I was impressed at her choice. I had the special, like always, today's was a melted caprese, and we split an order of tots. Gotta have tots.

The one problem with these meals on wheels is the lack of seating. Most of the trucks are parked so people with actual jobs can grab their food and go back to their desks. For people like me (who work without pay or an office) we are on our own. Luckily I parked next to a nice patch of grass in the sun. Too bad K wanted to have a car picnic, it actually sounded like fun. While we were dining I received a call from my friend C who saw my Facebook post and was on her way. Cool, company and a chance to convert another friend to mobile meals. C arrived with her darling blond almost 3 year old son D, looking radiant and pregnant. She was about to have the perfect lunch! Although K and I were finished we waited for C and D in the now huge line, when they finally got their order we escorted them to our grassy patch and enjoyed the lovely weather. K was having fun letting D chase her around and she did her best to watch out for him (there was $1 for her if she did).

C and D loved their lunch and were happy to have made the short trip over. While we were wrapping up the impromptu playdate we were asked by a crew from Japanese TV, they wanted to interview us for a segment on how these trucks have become so popular. They clearly had no idea that they had met the cheerleader of the Grilled Cheese Truck. They interviewed us all and took shots of the kids.

Only in Los Angeles can you pay $20 for cheese sandwiches from a truck you had to find on the internet and then got stopped by a television truck.