Hurry up and wait! 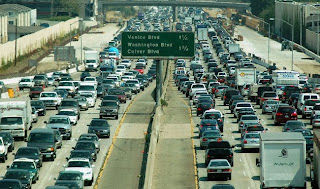 So today was supposed to be an easy day for us. A casting in Santa Monica at 11:00AM and then a continuation of our playdate with L and J (the kids needed to finish their books at Scribble Press) after that. The audition was a breeze and we got great parking. Somehow I always end up in Santa Monica on Wednesday when they have the Farmer's Market, lucky for us we had to go to 5th Street and not 3rd. We were in and out in less than 10 minutes. I was getting K's lunch together and figuring out when we would meet L and J when I got a call from K's agent. Can we make it to a last minute casting in Hollywood? We cold go anytime up to 5:30PM. I asked K if she even wanted to go and she did, we decided to go later closer to the end of it. I called L and let him know we would have to skip out at 4:00PM giving the kids a couple of hours. They seemed fine with that and off we went. It didn't take long for the kids to tire of drawing so we left (again) and got them some treats at my favorite coffee place.

Since we weren't in the middle of finishing great works of literature we decided to leave for Hollywood a little early, I knew traffic would suck. As usual, I was correct. I jumped off the 10 and headed east on Olympic. Much better. On the way I called D and told him we would love to meet him for dinner if he had the time. He did. We made it to the casting location and managed to find decent parking, we walked through the door into a crowd. I sent K over to a family we knew and went to sign in. The girl seemed a little frazzled and asked what time we were scheduled. I told her we might have been a replacement because all I knew was that we needed to be there by 5:30PM, the girl went ballistic! She told me that the photographer had to leave by 5:00PM, no biggie I told her, we made it as fast as we could and if it was too late we were cool with that. She relaxed and called K's agent and yelled at her for giving the wrong time. This made me giggle. While we were waiting I got a frantic call from K's agent telling me to get to the casting right away and not to be there after 5:30PM. OMG I just heard the conversation that prompted the phone call, she clearly said 5:00PM (which was close to the time already). I told her that we were already there and she seemed relieved.

When it was K's time to go in they wanted me in there with her. I told them we don't usually roll that way and went in with her. She was to sit in a big chair and laugh. Easy enough. Then I was supposed to make her giggle. Not so easy, she doesn't like me in with her. She managed a cute laugh and they got a few shots and we were done. Usually you know if they are interested or not by the amount of pictures they take. We walked out and I called D to let him know we were on our way, when he asked how it went I told him that K did great but she didn't seem to be waht they were looking for. This happens a lot and we are fine with that. Plus we got to have a nice family dinner out.

We drove to D's office and had dinner at one of our favorite sushi places. K is a really picky eater unless the food is expensive. Then she eats like a champ. We discussed D's taekwondo lesson the next day. He was being tested for an orange belt and we wanted to be there. He called his sensei to make the test earlier. I like to make the most of our time so having the lesson early meant we could leave D's car at work and all go in together in the morning. It must be an OCD thing. I always do stuff like this. Besides I really did not feel like driving home again. My car hit 10K miles as soon as we parked at the casting.

We drove home with little traffic. WHile I was excited to see D's belt testing I was less than thrilled about driving back to Hollywood once again. But again, that's how w do things around here.
Posted by MicheleB at 11:12 PM