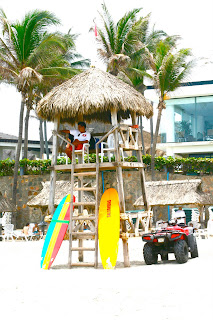 We awoke in what I am sure is heaven. Realized we had nothing in the way of snack and did what any American family in a foreign country would do, we went to Walmart. I had done some research and knew that Walmart was close and full of the snacks and drinks we would need for the week at a fraction of the cost the hotel store would charge. We found a driver, negotiated a fair price and took off. Apparently this driver thing is big here, the Internet is full of glowing reports of a few of these drivers, we just picked the first one we saw, he seemed nice enough. We loaded up the cab with our goodies and stocked the room. Then we finally made it to the giant pool, we decided to attack the waterside another day, neither of us was really in the mood to slide anywhere. The pool was great and the poolside beverage service was greatly appreciated. We checked out the beach which was lovely, even the sea of vendors, scammers and "I got a good deal for you" guys didn't spoil it. The water was beautiful but rough, K got knocked down pretty good but we were right there for her, she played high theatrics for a while but was fine. We alternated between pool and beach and then came up to get ready for dinner. We decided to keep it low key and stayed at the resort for an OK dinner. After we came up we did our best to convince K to sleep in the giant living room, luck was on our side and she was excited to have her own room. D and I took full advantage of the huge tub in the bedroom.

Waterslide day! But only after breakfast first, we all knew that having every meal out would get to be a bit much so we got a bunch of stuff for breakfast. D made some awesome coffee, fried up bacon and we had some fresh fruit (D was quite impressed at the quality of fruit the local Walmart had and so was I, yum!). We grabbed our bag and went downstairs, I decided it would be a great photo op so I brought my SLR, I figured I could grab a few shots and return the camera back to the room safe (unfortunately this is a place you can't just leave stuff lying around). As soon as we walked out side we were hit by the heat, it was crazy hot! It was so hot I couldn't even take a picture, the lens immediately fogged up so I just brought it back. Good thing, it freed me to enjoy the lazy river and water park. D and I also enjoyed the especial margaritas. I took a break from the rafting and was wading in the water park when a little girl Ks size came up next to me to chat, she was adorable and her mom came up to us to bring her back and save me, I told her I had a daughter the same age who was looking for a friend, she looked thrilled (actually they both did). I introduced K to the girl and they played together until I decided that we had enough sun for the day. That was after hours of waterpark fun. We said our goodbyes and got ready for dinner, K wanted to bathe with me in the giant tub, I have to admit it was fun having a bubble bath. Too bad Its nearly impossible to rinse out all the shampoo and conditioner necessary in this weather, it's so humid here nice hair is an impossibility for a girl like me. We traipsed down to one of many restaurants here and we were disappointed by yet another empty eatery. I get it, every other country eats later than the US but we not only had a kid we were tired by 11PM. We decided to find our favorite driver and go to the mall down the street, I read that it was chock full of places to eat. Out favorite driver mistook our generosity the day before as stupidity because he wanted to charge us twice what the fare should have been. Crap, now not only did we need to find the haps around here we also would need to find another driver. No biggie. We made it to the mall and found a rib place, K is a sucker for ribs, anyway we were happy with our choice even though no one spoke English, we were like celebrities there apparently the recent murders in Acapulco seem to keep the gringos in the resorts, we were fine, they even brought K a nice plate of ice cream gratis. D and I chilled on the balcony playing games on the iPad after K went to bed.

Another awesome breakfast courtesy of my husband, crispy bacon, fresh fruit and some amazing coffee got us started, we slept late too enjoying our first meal at about 11:30AM. We beach and pooled it for some of the day, I met a cool couple from Australia who gave me the low down on the driver situation. We took some pictures and then came up for a break from the sun and some lunch. I decided a break from the heat would help us later in the day and keep the sunburn to a minimum, it helped K and I but not D, he is currently a lovely shade of magenta. We went back to the waterpark and K found her friend, we stayed there until the sun was no longer beating on us. For dinner we had the Monday night especial Lobster dinner at the outdoor cafe, it was OK, the location ruled and we laughed at the oncoming storm, it started as our dessert was about to be served so we got it to go and headed up to avoid the storm that started. K is now asleep and D and I are about to take this party outside once again, this time the iPad is strictly for background music.