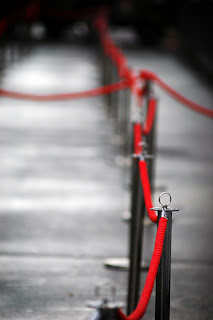 The waiting is the hardest part. I totally get what Tom was talking about. This being on hold thing kills me. Back when K started in this business being put on hold meant that you got the job. Now it means that they like you (and a few other people) but they are deciding on who specifically fits the breakdown and they don't want anyone else to book you. That was the case this week. K was up for a huge national commercial and it came down to her and another girl. I sweated for hours and then found out via Facebook. It seems the other girl's agency is like a family and they post congratulations when a kid books. More on this agency next week. Long story.

Anyway, I had to tell K and for the first time ever, she was crushed. Not so much because she felt she lost out on something but because she knew it wold be fun. I felt bad for her, I asked if she wanted to take a break from the biz and she said "No way mama, I'll get the next one that good for me." Wise words from the six year old professional. In my head I knew that made a mistake (what kind of mom would I be if I didn't feel that way?) but K happily moved on to the next. D brought her home a little Tinkerbelle cake as a consolation and the commercial became a memory.

Honestly, I don't know how grown up actors deal with this. I know that you can't take it personally but you put in so much effort just to be rejected most of the time. This business is not for the faint-hearted. I love my daughter's attitude about this though, I also am proud of the fact that she knows it's a group effort. She knows that it's not just about being cute and smiling for a few snapshots. Even at six she knows it's about dedication and follow through, principles she applies to her karate and piano lessons. She knows that if she's not going to give her all she doesn't belong there. This too is a group effort. She needs someone to drive her, see that she has what she needs and is prepared for anything. For the most part it's me who does this during the week, and I do it happily as it's my current occupation. On the weekends, it's mostly D. He takes her to the Saturday karate class and then off to piano. I am musically challenged and am useless at the music studio. I make her practice at home but honestly I can't tell her if she's doing it right, to me if it sounds good, it's good. I'm a rock star at auditions though.

So now it's on to the next for us. Tomorrow she has another audition and I know that we'll do our best. Both of us, we're Team K!!
Posted by MicheleB at 9:12 PM