and the Saints go marching right over the Colts! 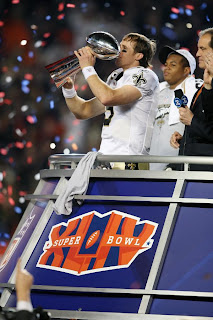 Congrats to Drew Brees and the New Orleans Saints, what an awesome game! It's not like I'm a Saints fan or anything, I'm true green and always will be. Drew Brees and Pierre Thomas were the stars of my Fantasy Football team and they took me to our Superbowl (where I lost big to D, waaaaa). I called a Saints Superbowl victory early in the season, they just looked like champs to me and they played with true team spirit. Not like the Colts, although they played well enough to get them to Miami, they are led by a QB who is clearly NOT a team player. There's a ton of talent in Indianapolis but it's always all about Peyton. Sure he took home a ring in 2006 by beating the Bears, but it was Rex Grossman's Bears. Enough said.

Any time I hear something about the Colts it's always Manning, Manning, Manning. Guess what? The Colts are a team with 53 players and unless they play together they ain't gonna win. Manning must be a believer in his own press releases because if you watch any Colts games he's always sitting on the sideline, alone. What do the other QBs do? They go over plays, review mistakes and engage in team camaraderie, even Tom Brady does that, and if you know me you know I'm not one to praise Mr. Wonderful. So if you were watching the big game today you know that the Colts were on top the whole first half of the game. The second half was all Saints, clearly they went into the locker room at the half and as a team decided to get their shit together, play like the champs they are and win the game. Together.

I hate the expression "There is No I in Team" but it's so true. I don't care how good you are, you aren't going to accomplish greatness alone. Every day we celebrate victories in our life, some are big, some are small, but they are enjoyed so much more when they are shared. Especially when they are shared with the ones that help us in the daily struggle. Great writers and artists might work alone but they almost always find inspiration in something. Scientists and Doctors work in teams to find cures for the diseases that make us sick and the medicines to make us better, teachers and schools work together to help us learn and grow, friends and families work together to pass on the traditions that we will keep in our memories. Not sure where I'm going with this but while I was watching the game all I could think of was there is no way the Colts are going to win when their "leader" does not have the best interest of the team in his heart. It was clear from the look on his face. I know this because I've had that look, I've spent lots of time thinking that I can do what I need to do alone and I didn't need anyone's help. I was wrong. No matter how good I am at something I cannot achieve greatness by myself. Nobody can. It's a good lesson to learn. I'm lucky I never lost a Superbowl because of my stupid ego, I'm sure I've lost some things though.

So yes, there is no "I" in team. There is an "I" in friends as well as family, and I lean on both to achieve the greatness in my life. So thanks to you all I am not sitting on the sidelines, alone.