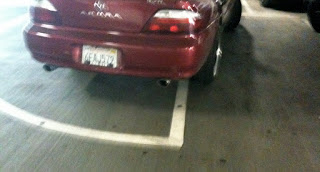 Shortly after arriving in Los Angeles (about 14 years ago) I was diagnosed with a severe case of road rage. I found this hard to take, before moving to Los Angeles I had never really driven a car. It came on fast and spread quickly. I tried a variety of treatments to keep it under control but nothing seemed to work. I had good days and bad days, I had also come to the realization that there was no cure, I would just have to manage. Anyone who has ever driven a car in Los Angeles knows that this was not an easy thing to accomplish.

Right after K was born I did my best to keep the symptoms of my road rage at bay, at first it was excruciatingly painful to suppress, but I got used to it. Yelling, screaming and cursing only made her cry more which made the driving worse. As she got older I even had to stop the bad language and obscene hand gestures. Smiles replaced scowls and flipping the middle finger was replaced by flashing a peace sign. I used my yoga breathing to get me through the rough times and relied on K's happy smiling face to keep me in check.

I have to say that for the most part, motherhood has kept my road rage in remission, I do have my moments but they are usually just isolated incidents that I manage to let slide by with dignity and grace.

I don't know how it is in other cities but here in LA you can tell that all the horrible drivers are out in force in a matter of minutes. My first clue today was a commercial van swerving in and out lanes on Pacific Coast Highway, I successfully avoided a collision and cautiously pulled up next to it to see what was going on, in the front seat were three guys beating the crap out of each other up and laughing hysterically. I am desperately trying to remember the name on the van so I can call and complain. The second clue came when I got off the freeway, waited for my light to change on Pico blvd, the light changed and seconds later a car slowly flew through it. OK, I knew what kind of day it was going to be. I decided to do just one errand and get home fast, then pick up K from school and go right home!! I made it safely to my favorite discount store, pulled into the parking lot and counted my blessings. Before I got to one I found a spot, put on my blinker and stopped to let the person behind me pass so I could park. He didn't move, I pulled up a little so he could pass, and what did this A-hole do? Pulled into the spot. I didn't move, I was in complete shock. "Are you kidding me?" I said hanging out my window. "Are you f$#@%&g kidding me?" Two guys got out, pulled their hoods up and one said "yeah, thanks." WHAT???? My blood was boiling, I let out a stream of expletives that would have made George Carlin blush. Then I found a spot, composed myself and bought a latte.

Then I got really mad, and a little scared. I'm a 5'3" 110 pound woman, and these guys could do some damage to me and my car. I went back into the parking lot and took pictures. In fact, the picture above this post is the offending car and you can tell by the way it's parked that they pulled in fast and without thinking. Taking the pictures and allowing time for the caffeine to enter my bloodstream calmed my nerves. I went into my mecca and started looking around, a few minutes later I saw the guys that caused my blind rage and guess what? They didn't look so tough, they looked stupid and pathetic and one of them had the audacity to give me a sly smile, apparently he didn't recognize me as the insane driver. I lost it again, publicly berating them and letting them know that what they did was wrong, that they were cowards and the lack of manners and respect they showed was disgraceful. So now I knew that they weren't tough at all and were actually embarrassed. Good, I felt better and safer, there was no way that could harm me or mess with my car, the store was pretty crowded and they all had my back.

I drove home slowly (but not to slow) and carefully. I stayed home until pick-up, retrieved K, did a quick errand and came right home. When D works late I usually do something special for our dinner and today K wanted sushi, as much as I wanted to indulge her I knew the right decision was to keep the car in the carport and stay home. I wasn't as worried about running into LA's Most Awful as I was about losing my cool again.

I had gone so long without an incident, and even though today's was totally justified it didn't feel very good (well, it did at the time actually).

Tomorrow is another day, a day full of errands and appointments that will take me all over the place. I'm pretty sure that things will not be as bad as they were today but if someone takes my parking spot they better be prepared for my wrath, I may be small but I am LOUD.
Posted by MicheleB at 3:09 PM