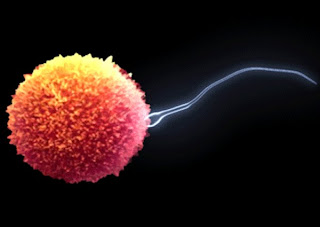 No don't worry, this isn't a "guess what??" post. Besides I just wrote my rant about my only child, that would be ironic though. I'd have to change the name of this blog because there would be plenty of melodrama!

I'm writing about conception because seven years ago today D and I conceived K. How and why I remember this is a story in itself. The day after the Tampa Bay/Oakland Superbowl I got food poisoning, and it was bad. I was in bed for a few days and felt awful for weeks after that. A few weeks later we went snowboarding in Mammoth for President's Day weekend, there was no chance to have any alone time since the house was full of our friends, I had my period and D's ex girlfriend was there. When we got home I somehow ended up with a UTI which kept me out of commission for a while. So much for newlywed fun. It was on a random Wednesday that I finally felt better, I believe we celebrated the return of my wellness by going out to dinner. After a month on the bench I was ready to get back in the game, and we were both relieved. I won't go into specifics about that part of our evening for a few reasons, one of them being my dad, who reads this. It's OK dad, you can uncover your eyes, I'll be vague. This is the TMI part, sorry. Usually right after, I get up, clean up and get ready for bed. This time I dozed off for a few minutes (something I have never done) when I woke up I told D that I had the strangest dream, someone had handed me a tiny baby girl, so tiny that she fit in the palm of my hand. "Maybe we made a baby" he said, "yeah, sure" was all I could come up with.

The next morning I went to the computer to check my online fertility calendar, I was only using this because I wasn't on the Pill anymore and I needed to know when my period was coming, with all the illnesses I had, I lost track of it all. What I saw was that the day before was outlined in bright pink, it was the most fertile day of my cycle. I wasn't really worried, I had only been off the Pill for over a month. A week later D and I were on the couch and I kept complaining about food smells and he would look at me like I was insane. In the meantime we bought a bunch of pregnancy tests online. They arrived a few days later and just for fun we tried one out. I'll tell you that those two minutes go by s l o w l y. I'm not really sure if I was surprised that it was positive but I didn't trust it, so I did another one, and another one, and another one. They all had that perfectly clear and easy to read red double line. We were shocked. We were amazed. We were thrilled. We had no clue what to do next. I immediately called my dad because I wanted him to be the first to know.

Later that day I thought back to the night of the 26th, and the dream of that tiny baby girl. It wasn't a dream it was a premonition, which kind of goes against all I stood for as a card carrying pragmatist. It was OK, I was going to be a mom, I can have at least one outer body experience without the need to question it right? I can go out of my practical comfort zone for a while and believe in something magical, especially if it had to do with the baby I was carrying. Besides I knew that the baby was a boy, the dream was sort of wrong.

To feed my practical side I ordered every pregnancy book there was (from Amazon of course, why pay retail?) and bugged my doctor about the potential diseases my unborn child may have after reading those books. I did all the practical things a new mom-to-be should do: I researched diets, cleaning products and car seats. I sat down with my doctor and gave him a detailed list of my families medical history, when he asked for D's I told him we didn't have it, D was adopted. My doctor suggested an amnio and I agreed. A much more practical way to check for any potential problems. Besides, D so badly wanted a girl and I knew the baby growing inside of me was a boy. That would be an ideal time to let him know. The test was easy, it didn't hurt all that much, we could see our baby floating around and waving, but never getting in a good position to tell the gender. Figures. The next week was awful, to keep myself from going completely insane I stopped looking up "potential amnio results" on the internet. My dad came out for a visit so that helped keep my mind occupied. We were driving around about a week later when I got the message from my doctor's office to call them, not a good time for a missed call!! We pulled over, I jumped out of the car and dialed the office, they gave me the results of the amnio, my baby was perfect, did I want to know the sex? Of course. "It's a girl!! Congrats M we'll see you next week!"

I wasn't sure what freaked me out more, the fact that I was wrong or that the premonition was right. I broke into tears on the spot, the warmth that overcame my body when the nurse said "girl" is a feeling that I remember to this day and is making me cry as I write this. I had hoped for a boy because I was afraid of repeating the mistakes my mother made with me, if I had a girl I would surely do that. I knew from that phone call that would never happen. Everything from that magical moment changed, including realizing that things can in fact be magical. There is no such thing as practicality in parenthood.

From then on I tried (again, try is the key word here) to be more abstract about things, especially relating to K who had been named the second that double red line appeared. Lucky for us the name worked either way, how practical to have a name that fit either gender. Getting pregnant and having a kid is a great lesson in practicality, the more you try to reason and dissect the harder it will be. The lesson? There is nothing practical about babies and kids. The quicker you learn this the better! Expecting things to go as you planned will only result in frustration and anger. If you can learn to accept the unexpected not only will things be easier to manage they might even be fun. If K wants to be a princess when we go shopping, who cares, is it practical for a six year old to wear a detailed handmade princess dress, plastic high heels, a tiara and opera gloves? It is to a six year old. Did I ever think I'd let my child do something like that?

No, that was inconceivable.
Posted by MicheleB at 4:27 PM