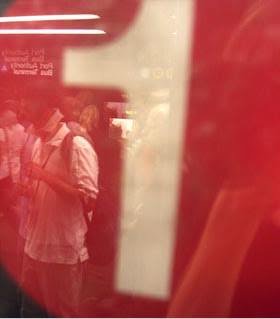 I used to want 4 kids, of course that was a lifetime ago even before I married Starter Husband and moved to Los Angeles. As I got older the number went down to 3, I even had the birth order: boy, girl, boy, and a list of names that I loved (Joshua, Justin, Eden were the top three). Starter Husband was very eager to start a family but that was due to family pressure more than a desire to be a dad. Besides, the thought of having kids with him, at that point was a bad idea. We parted ways before anything that would permanently bond us together forever happened.

One day, soon after D and I had been dating a while the "kids" discussion came up, I was pretty vocal regarding my opinion on the subject, although I was never one of those girls who had a ticking time bomb in my belly. D on the other hand, had a different answer. While he wasn't opposed to the idea of fatherhood, the thought hadn't really occurred to him. That was good, at least he wasn't one of those guys that absolutely positively did not want to willingly procreate. He knew that spending his life with me would mean that eventually someone (hopefully) would be calling him daddy. We were married in September (21st, just like in the Earth, Wind and Fire song) and in October we had a small pregnancy scare. Thankfully (for me) I was not pregnant, I think D was a little disappointed. That Christmas we went up to see his family, my reward for enduring such oblications is and always has been a trip to San Francisco (the location of our awesomely spectacular wedding). It was during this compensatory part of our trip that D suggested I stop taking the Pill. Huh? We had only been married 3 months, and aside from his mother asking us in her wedding toast, when she was going to be a grandmother, the subject hadn't even come up. OK, I can deal with this. When we came home I made an appointment with my doctor and we went over the whole what to do before you're pregnant stuff. Since I had been on the Pill and I wasn't 21 he said to give it six months to a year before getting pregnant. Cool, that meant some time being a newlywed, trying but not really trying, so basically having lots of sex and calling it babymaking. Score!

Less than six weeks later, I was pregnant.

The funny thing is at the time we were thrilled, we knew we wouldn't have to suffer through infertility issues, basal readings or annoying charts and graphs. My pregnancy was perfect, the only problem was early labor at 7 months (ironically the day before out first anniversary, K wanted to crash our dinner I guess). A trip to the ER and some IV fluids solved that.

Then we brought our baby home, since I had lots of kid experience this was going to be a no-brainer. D could sit back and relax, I was in charge!! Nope, never happened. I was not in charge, I was lost, exhausted, and suffering from a wicked case of Postpartum. D on the other hand was a natural dad and handled K with the ease of a man who had spent a lifetime around children. It really was a beautiful thing watching him with K, I love the pictures of him asleep on our couch, his arms gently but firmly holding the tiny pink bundle.

Eventually the fog lifted, we found a bigger space (while I loved our beach pad I not so affectionately dubbed it "the cave") and I got to decorate the nursery. Things that attributed to my postpartum depression. I fell into motherhood the way I knew I would and our life went on. It was somewhere around K's 6 month when I realized that she would be an only child. D and I never spoke at any length on the subject but it just felt right, the three of us. Three is a magic number, just like the old Schoolhouse Rock song. Our trinity was our destiny. The thought of those two other kids I wanted never again crossed my mind. Besides K was absolutely perfect, an angelic looking beauty that literally stopped people in their tracks, strangers took her picture, women in Rite Aid made blessings on her and I spent most of my day saying thanks to people who made endless comments about my daughter's heart shaped lips and infectious smile. There was no way that I was going to top this kid.

I don't regret this decision, it's right for our family, and not because of the bumpy road we started on, if I had another baby it would be cake, this much I know. I just don't want another child. When people ask me if I miss having a newborn I tell them that I miss K as a newborn. I'm in no way judging people with more than one, I'm simply saying that for D and I it's one and out.

This doesn't sit well with some people, I am constantly being lectured on the dangers of having an only child: they are lonely, spoiled, selfish and desperate for attention. Yeah, ALL children are guilty of that. My daughter has a million friends, will gladly give away her favorite toy if it makes another kid happy and gets all the attention she can handle right now. I was at a party with my buddy A once and she witnessed a woman practically berating me over my decision to have one kid, A was incredulous, how could I take such a verbal beating? I told her that I am secure in my decision, this other woman clearly was not as secure in hers. I suppose I could just offer up a made up medical excuse to get these serial moms off my back but that wouldn't be me.

We take K everywhere, something we may not be able to do with more. Sometimes she asks for an older brother or sister but that's usually right after a playdate with one of her non-only friends. After a while she'll tell me that she's happy she's the only kid because she gets all the love.

I love the number three and I love the triangle we have created. It's the mathematical symbol of ideal proportions. Three sides supporting each other.

Sounds ideal to me.
Posted by MicheleB at 4:13 PM