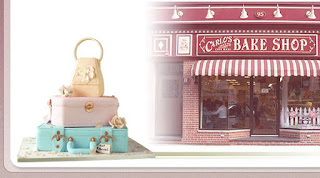 I don't really watch TV, unless it's Keith and Rachel on MSNBC or the occasional sitcom here and there. I hate reality shows more than Lost and those initial crime shows and forget about daytime TV. Recently I put a cap on K's TV viewing, she had somehow stumbled upon TLC's Cake Boss one day and really liked it. I set the DVR and recorded every single episode (thank you cable networks for the popular marathon stunt) so now when she's earns TV time that's what she watches. I love and hate TV time for K, I am grateful for the distraction and can usually cook or write during that short time but I hate that glazed-over catatonic look that she usually gets. Cake Boss doesn't have that effect on her, in fact now she calls out for me to see some awesome cake that Buddy (the Cake Boss) has made, instead of screaming her snack requests like she used to.

Most times, I'll come and join her, she likes when I do this, not just because she loves me so much and enjoys being with me (at least in my head she does) but because she knows that I will totally get into watching it and will HAVE to see the next episode.

"OMG, is that a life size motorcycle he's going to make?? Dinner can wait!!!!"

Suddenly K has become extremely interested in baking, a different kind of interest from before, that interest was based entirely on wanting to eat copious amounts of cupcakes and cookies. Now she wants to bake huge colorful cakes and spends hours sketching their designs. Today D had plans to play football with some friends in the park (outside on a Sunday?? No more NFL until August) we were going to tag along and cheer him on. K decided she didn't want to go, I think she was caught up in a serious cake emergency and needed to see how it played out. That was actually fine with me, I was tired from the wine tasting we did last night (8 bottles, 3 people, no driving) and welcomed the rest. Rest is for suckers and the parents of quiet children. K somehow convinced me to make a cake with her using fondant "just like Cake Boss Buddy" something I have never done before. I went right to the interwebs and found a recipe that didn't require a physics degree or a kitchen staff of 12, merely a trip to the supermarket. Cool, I can handle that. Our shopping cart was a nutritional nightmare: marshmallows, confectioners sugar (lots and lots of it) eggs, butter, cake mix (yes I am a lazy baker), icing and to make it worse I threw in a tube of those awful but addicting Pillsbury Grands! cinnamon rolls because I forgot to buy them during the week like I promised (I didn't forget, I was hoping she would forget, silly mama).

Lucky for me I was wedding register happy eight years ago and had a collection of cake pans that had never really been used. K's plan for our first creation was a simple square cake (like a present mama) covered in turquoise fondant, a plan that required multi-levels of fluffy vanilla cake cut and stacked on top of each other (easy, thanks Buddy) dirty icing (a term K learned, basically icing the cake so the fondant will stick to the cake) and then the fondant. That was going to be the fun part. K wanted so badly to help me with this part, all I'm going to say about the process is that cups of turquoise colored melted marshmallows combined with cups of powdered sugar makes a mess so great that it actually repels cleaning products. I used all my might to fight the OCD in me, it worked, we had a great time. We were covered in blue marshmallow paste and we didn't care. We didn't care when it took over an hour to get the fondant from sticky and wet to dry and ready to roll, I mean this literally as we finally got to christen our rolling pin.

K is smart, by this time she had taken to her usual seat on the counter and was telling me how Buddy usually does this or that, reminding me that I needed more powered sugar on my workspace (she was right). A few hours after starting, our masterpiece was finished. I added a little decorative touch and vetoed her idea to use all the old colored icing we had, apparently that made me mean. Whatever, call me mean, it took me hours to make that cake and I wanted it to be pretty.

We invited some neighbors to join us and in a matter of minutes our beautiful creation was devoured and enjoyed. It was good too, and not just because I'm cake deprived.

I had fun doing this, it was a lot of work but the payoff was huge. It was a joint effort and K was a big help, working by my side for most of it, bossing me around for the rest. Before she went to bed tonight she told me about the next cake we are going to make, it's going to be a four tiered multi-colored creation, maybe with an ocean on top. She's still conceptualizing. I'm sure by tomorrow she'll have it all figured out. We never did anything like this after watching Spongebob. I still hate reality TV but will relax about it if the reality takes place in a kitchen.

I'm so proud of my little Cake Boss and grateful she didn't discover LA Ink first.
Posted by MicheleB at 7:19 PM