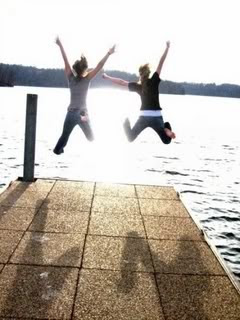 Growing up I had my fair share of friends, and like most girls I usually had a BFF, I'm not sure if we had a cool name like BFF though. When I started middle school I found a new group of girls to befriend and found a new BFF (who I have recently reconnected with on Facebook!). In high school I made some great friends (also recently found on my beloved Facebook) too and shared some really wonderful times with them but then I sort of found my way to a different group and lost contact with my other friends. This group was different, we didn't bond over shared interests or similar backgrounds, I think we mostly bonded over feeling lost and left behind. This group was what I call now the Freaks and Geeks" except we were mostly freaks. I did have a BFF in the group and we spent a lot of time together. I feel like during that time I just gave up on having a best friend to share my secrets with because what I wanted to do was get away from my secrets. This friend was just someone I hung out with. I was able to escape from my house and hide in hers since her mother didn't really care what she did. Her mother had been reduced to chauffeur and ATM, sadly, I was actually jealous of that. We used to go at night and come home at 5AM, not only did her mom not care but she made us breakfast. I would just tell my mother and Evil Stepfather that we were going to the movies or watching TV and it was just easier to sleep over. It always worked.

Looking back we must have been a motley bunch, like the land of misfit toys dressed in black trench coats and combat boots. I think we did whatever we could to stick out just to ask why everyone was looking at us. While it was cool knowing I was a high school kid hanging out in the same New York City clubs as Andy Warhol and Madonna part of me (most of me) missed my BFF from middle school, doing makeovers and sleeping over her house on Saturdays was where I belonged. Dressing up in ridiculous (but way ahead of it's time) clothing, staying out all night and drinking really was no fun at all. What I wanted was a friend, what I had was a lifestyle.

Most of that changed when I went away to college, another clean slate, at least that's what I hoped. Within days of my freshman year I had a new boyfriend and new best friend, his gay roommate. I was no longer a lifestyle, I was now the plot of a French New Wave film. Whatever, at least I had a friend to share things (and clothes). We had a great time, running around campus in ridiculous costumes, taking pictures and making films, pretending to be Andy Warhol and Edie Sedgwick. This was a strange time, Evil Stepfather was gone, my dad had remarried and was now a new dad with a young wife, I was pretty much alone. I threw myself into the role of "muse" and girlfriend of a tortured filmmaker, at least I had a friend to tell my secrets. This lasted for a while until they both graduated. My BFF returned to his hometown and the boyfriend? The last time I saw him he was being escorted off campus by security for harassment and violating a campus order to stay away from me. By that time I had met Starter Husband and had a few cool girls to hang with, no real BFF though. The more time I spent with Starter Husband the more I grew to love and adore his sisters who became my confidants. I was thrilled, not only did I have two BFFs but I also had two girls that were like sisters to me. Sometimes I think I married him just to keep the female members of his family in my life.

When we moved to Los Angeles it was his sisters who were completely devastated, not only were they losing their brother but they were losing me. We shared secrets, lies and truths, things that their own brother even to this day does not know. They came to visit often and I cherished those moments and the nights we stayed until morning talking. The last time I saw them was right before we got divorced. I went back for the Jewish holidays (the Fall ones) they were thrilled that we were traveling together. I was honest with them and told them it was doubtful that we were going to get back together since he was still dating the girl he started seeing when we first separated. They told me that he wasn't with her and that all he talked about was starting a new life with me in a different state (he had a job offer in Denver). I tried to convince them that we were done, this trip was really to say goodbye and I guess they weren't ready for that. Months later Started Husband moved to Denver and begged me to come live with him, I told him that it would be really crowded at his place since his girlfriend had followed out there. I told him to please say goodbye to his sisters for me and to tell his mother that I missed her.

I vowed that the next time I made a friend I would be careful about getting close, It sucks losing friends and it sucks even more when it keeps happening. Although I did have a sort of BFF, a girl named S that had worked with Starter Husband, she was cool and we had fun together, she was so needy but at the time I needed that. Being her primary caregiver meant I had little time to deal with my own emotional issues which were happily swept under the rug. Through S I met all her friends who were all guys, while I was married to Starter Husband I saw them when we all went out as a group but after we separated I relied on these boys for all my social activities. One of these boys, CB, became my favorite. We spent so much time together and shared a love for music that has never been matched. When I met D I stopped hanging with my boys, I stayed friends with S who was even the maid of honor at my wedding. After I had K I realized that I did not have the energy or mental capacity to watch two babies, I had to break up with S. I recently met up with CB to say goodbye, he was moving out of Los Angeles, we picked up right where we left off and I count him as one of my most cherished friends.

After I had K I needed mommy friends and found out that not much had changed from my childhood, it's hard to make a BFF. I went through a few nutbags before I found A. I've written about our history before so I won't do it again, I'll just say we bonded over everything, she was truly "good people." Over the past six years our friendship has taken on many incarnations, lately I feel like we are closer than ever and I know that no matter what I tell her, or what she tells me this will be a friendship that lasts through the ages. Adding to my friendlist is L who I've also written about, L and I have a similar past and are able to communicate on so many levels. For most of the last year year L has helped me get through many of the issues that I had swept under the rug, having functional friends makes the sweeping of these issues impossible. Having functional friends make dealing with problems easy, it's like having a therapist on retainer except the currency for payment is your own functionality. I could not have gotten through this last year without A and L.

The BFF that I lost for a while and recently got back is the one BFF that I have been taking for granted. This is a friend that I have shared most of my secrets with, that I used to come to when I needed to talk or when I needed some grounding. This BFF has been with me through some bad times as well as some pretty great ones and somewhere along the road we lost touch with each other. It took a while to reconnect but it's going pretty well, we have so much in common now, more than we ever knew, or even wanted to know. We actually look forward to hanging out and have found that we also like talking on the phone and texting. We are having a great time meeting for lunch and had a lovely breakfast out recently where we just talked and talked about nothing and everything.

I am lucky to be able to call some of the best people I know my friends and I am fortunate that they allow me to be part of their life. I am grateful to Facebook for giving me a chance to reconnect with the childhood friends I had left behind and thankful for those friends who have reached out to me. I am blessed to be given a second chance with D, my BFF for life. A friend that I might have lost for good had I not found the strength (some of it from D himself) to look deep within myself to find what was truly important to me. I get by with a LOT of help from my friends.

"Grief can take care of itself, but to get the full value of joy you must have somebody to divide it with." Mark Twain
Posted by MicheleB at 8:01 PM