To have and to hold. 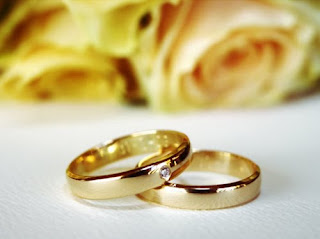 This isn't going to be a long one unless I finish later, D, K and I are off to a party in celebration of our friends J and P, who recently exchanged vows in Ireland. I've known J for a long time, he was part of D's circle of friends who adopted me (and I, them) at the start of our relationship. I always liked J and was happy to hang with him, he is an extremely social person and is always surrounded by friends. We bonded one night after a particularly strange evening: It was D's ex girlfriend's 30th birthday and the whole gang was invited, I had no problem with this, I actually encouraged the friendship, at least I did until I heard that she was telling people I called and threatened her to "stay away from my man" it's funny because it isn't remotely true. Anyways, a little backstory on this backstory, D had recently given me what I considered an inappropriate birthday gift, I was a little taken back and I insisted he do the same with this gift. I won't go into details but at the time it felt more like a gift to a booty call. Not a serious girlfriend as he said that I was.

So there we are celebrating at a table of about 25, I was sitting with D and his best friend (and eventually best man) G when she decided to open up gifts. She got to D's and I was a little worried for her, I had no reason to be, D had bought her a first edition copy of her favorite childhood book. I was really touched by his sentiment and annoyed by the timing. Whatever, I maintained a good mood for the duration of the dinner until afterward when G was making a comment about D and I and he said the ex's name, D thought that was hilarious, I did not. Then the wine kicked in, I was pissed off, to say the least. I walked away from them and headed down the street. That's when J caught up to me and took me into a bar close by. Over a round of drinks he made me feel better, I realized that I was being stupid but again, I suffer from terrible timing, I always have. J was one of those guys who related to women but only if he liked them.

J was also the very first to RSVP to our wedding and I have a picture of us, from the wedding, of me and J handcuffed against a wall. He always tells people that our wedding was the best one he'd ever attended, I suppose it now slips to second place as his is sure to be his favorite. I only wish we could have been there to see it, Ireland is a bit far for us. Besides it would have been nice to finally meet P who hails from Australia. That meeting had to take place a few weeks ago at a party for G's 40th birthday. I was asked to and gladly took pictures of the happy couple, they are so cute together.

When I was uploading them to Picasa, K asked about J and P and why they were kissing. I said they love each other, she giggled. I said they were married and she was shocked, "but how can they be married?" she asked, "they're both boys, they can't do that." I asked her why not and she couldn't give me an answer, I asked her why shouldn't two people who love each other be able to get married? Again, she had no answer. I told her that actually in this country and especially California two men, or woman were not able to marry no matter how much they loved each other, I told her that it was legal for two people who absolutely despise each other to marry if they were a man and a woman. She was extremely upset by this and asked the simple question "who says it's not OK for two boys to get married, how could there be a rule like that?" Another question for which I had no answer. Recently we went to a rally to promote the No on Prop 8 initiative, it was a kiss-in, and it was attended by couples of all shapes and sizes, we think it's important that K is understanding and accepting of everyone, regardless of race, creed, sexual orientation and religion.

So today we are off to celebrate J and P's union and K is so excited, she's told everyone who will listen that she can't wait because all people in love should be together. She spent the morning drawing and made a cute picture of J and P with their little dog.

OK we're back from the party and it was wonderful, K was the only kid there, of course. Like I've said before not having family around can be either a blessing or a curse, I'm not so sure which one it was tonight. I think K would have been absolutely crushed if she didn't get to attend this evening's celebration. We hardly saw her, she went off on her own with various friends throughout the evening. When it came time to cut the cake she was right up front, as usual. J and P each made a small speech and then P's sister made a speech and read some letters from friends who could not attend. When I met up with K after that she seemed a bit sad, when I asked her about it she said she that P's sister's speech was so nice it made her cry and that she was happy for them and wished they could have a real wedding in California. There was a house full of people who shared the same thought. J has been to most of our weddings and you can tell by the number of people tonight that all of his friends want to celebrate his as well. In the car driving home we had to discuss with K why our friends cannot get married in the state of California or most states for that matter, this is always difficult to explain but it bears repeating. I cannot possibly imagine what it must be like for J and P who have done nothing wrong but are being punished by laws that they had nothing to do with.

Personally I never really cared if I got married again after Starter Husband, I could have lived together with D and had a child. That piece of paper with the state's seal of approval wasn't going to make a difference in how we felt about each other. That was easy for me to say though, I have a feeling if that same state told me I can't get married I'd be walking down that aisle daily. It's not the piece of paper that makes a difference in the long run, sure it helps with the legalities of things like insurance, benefits and citizenship but there are ways around those things as well. The states cannot tell individuals that the love they feel isn't real, I was in a yard tonight that was overflowing with people, all celebrating the real and true love of our friends. That elusive piece of paper with the California seal is something they don't have yet, however they have something that many couples with marriage licenses don't. Love. Love from each other. Love from everyone around them, I know this, I saw and felt it tonight.

Given a choice, I'd choose the latter.

Congratulations J and P! Thank you for sharing your celebration with us, we wish you all the love and happiness in the world.
Posted by MicheleB at 1:38 PM