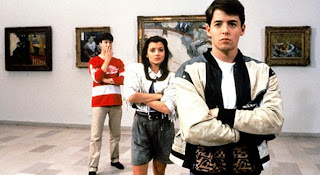 I remember back in the days when I worked for pay how much I enjoyed calling in sick when I felt perfectly fine. I believe they call this a "Mental health day." I would have had this planned and always made sure that there was nothing on my desk that needed immediate attention. I would make sure to call early enough so the call went to voicemail and that my morning voice had that "I'm really sick" sound to it. I was sick too, sick of work and needed a day to myself to do nothing and answer to no one. Those days were lovely. I remember the very first time I did this, it was my first real job and I had been there about a year. I just needed a break so I woke up one day and called my boss and told him I felt awful, he said to go back to bed and make sure to get some chicken soup. I actually felt bad hearing the concern in his voice. I managed to convince Starter Husband who was actually Starter Fiance at the time to do the same. We decided to go down to the South Street Seaport for the day and have lunch, it would be a nice change and there was no possible way to run into anyone down there. On the subway downtown we ran into a guy who leased office space from my boss, he saw my guilty face and laughed and told me that he was taking a sick day too. After that I never had guilt. I never got busted either.

I've always been a pretty healthy person and it didn't seem fair to me that I missed out on earned sick days, every company I ever worked for didn't pay them out and at the end of the year they were either lost or tacked on to the next year. Besides it always helped in my productivity, taking a breather from the monotony of the daily grind is perfect way to refocus. Fake sick days always had a different feel than weekends, everyone I knew already had those days off. Sometimes I had big plans for those days and sometimes I just stayed home and did nothing. It was more about the escape and break in routine that I needed. In fact the days that I didn't do a thing were more helpful than the ones spent out and about.

I don't get those days anymore, my "job" is more of a 24/7 freelance gig and I am always on call. A couple of hours ago D asked me what I was writing about today, when I told him I was harking back to the days when I could just call in sick and take the day he said that I should do that now. He would arrange to take K after school and I could just do what I want. I told him it wasn't about the time to myself. When K is in school I can shirk my responsibilities and do what I want, that's never been a problem. D is the first to tell me not to worry about the errands I need to do, he'll do them if I want, he'll always offer to pick something up so I don't have to make dinner and he'll gladly do the laundry if I don't feel like it. I never do have him do any of that stuff, except the laundry, I really, really, really hate to do laundry. I will do it on occasion though, it's one of my gifts to D :) It has nothing to do with taking the time for myself, but the way I actually don't have a myself anymore. I'm not complaining either, I wouldn't trade my life now for anything, I was just thinking about the days when I could just make a phone call and the day was mine.

Even if D did pick K up from school I would still be here in the morning for her and D, getting K cleaned and dressed, fixing her snack, finding her lunch ticket, making sure her backpack held whatever was necessary for the day, making sure D had what he needs and kissing them both goodbye. Then cleaning up the mess that was left in the dust storm that is our morning. I would be here when they returned from school and started on her homework, and even if D fixed dinner I would somehow find a reason to stand over him in the kitchen. As much as I love when D cooks for us I am uncomfortable letting go of the reigns, I can't help it. I know where everything is and where everything belongs.

There is no possible way I can just take the day off. I thought about even checking into a nice hotel in Santa Monica, I could wake up late, order room service and lounge around the pool all day reading magazines and listening to music. It sounds lovely, really and it's not like I don't have the opportunity, I'm sure D would have no problem with this. Heck, even K would love a mommy-free day. There is no shortage of nice hotels practically around the corner from me that could facilitate my own mommy version of Ferris Bueller's Day Off, the only thing stopping me from this is me. For one thing I'm kidding myself if I think I would be able to sleep in, I've never been able to do this before, what makes me think I could do it now? As for room service it would annoy the crap out of me to spend $50 for coffee and something I most likely won't eat, as for lounging around the pool? I don't do it now in my own home, what makes me think I would do it somewhere else? The only thing I don't have around here is a waitress (cause that would be me) to bring me drinks, but the practical me wouldn't do this because I would eventually get bored and miss my family and have to drive home.

So I don't know why I decided to write about a day off, it's not like I would take one even if I could. I hate being away from my husband and child for too long, I never felt that about any job I had. I remember having all the freedom in the world but no love, now that I have all the love in the world I don't really think about freedom. Sure I often complain about always having an entourage of one, but most of the time when that entourage isn't around I miss her. The house felt so lonely the Monday after Spring break, I was miserable. This morning D and K went out to breakfast and it felt strange to have silence around me on a Sunday morning, I was so happy when they returned.

My friends and family are constantly telling me that I need a break from my daughter, I used to agree but I honestly don't see anything wrong with wanting to spend the all time I can with my child. I mean eventually she'll have plenty of other things to do besides hanging with her mama, why can't I enjoy every second of the time have with her now? When she's older and off doing her own thing I'll have all the time I want. I'd really hate to spend that time wishing I had done more with her. That would be a terrible way to spend my days. I am guaranteeing that doesn't happen.

I'd much rather spend those days sleeping in and lounging by the pool, I bet it would be really easy to convince D to call in sick.
Posted by MicheleB at 7:23 PM