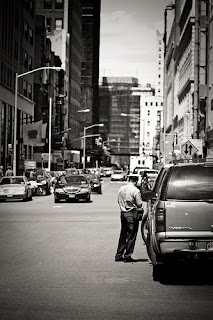 On October 19 of last year I did something that I had never done before: I got pulled over by the Los Angeles Sheriff's Department. I know, how is that possible? It was stupid too: I going North on Fairfax to Sunset, I thought I needed to turn sooner so I got into the right lane, there was a bus on the corner so I waited. When the bus pulled forward I saw that it wasn't Sunset and I proceeded to get to the left, as I was doing this I saw the "right turn only" sign (it had been blocked by the bus. As soon as I got into the lane I saw the cop who pointed at me and told me to pull over. Crap. K was in the car with me and started to cry, I told her it was fine and asked her to just chill. The officer came up to my window and told me that what I did was dangerous and that he had been sent out to that corner to "stop people like me" WTF? People like me. What did that mean? He said that there were a lot of accidents at the intersection because people kept ignoring the sign. I tried to tell him that I didn't even see the sign because the bus was stopped at the bus stop and there was nothing painted on the road like usual. I told him that I had never been pulled over before and that with a kid in the car I was a pretty safe driver. His nasty face and bad attitude told me that I should just up because he was going to be a prick and I tend to have a big mouth. Also, K was still crying in the back.

I tried to keep quiet but I had to state the obvious, I told him that there was really no way to know that it was a right turn only lane if there was a bus there and a small sign on the corner gives no warning. He didn't give a crap, just asked for my driver's licence and registration. I gave him my licence but since my car was new I didn't have the registration. He got really nasty asking me why I didn't have it, I explained that it was a new car and gave him the sticker info I still had from the dealer. He asked me if the car was mine, at this point I was starting to lose it, I think that if K wasn't in the car I would have ended up in jail for assaulting an officer. I tried to be calm for K who was quietly crying in her carseat. He then asked me when I bought the car and I told him. He asked me why I didn't have licence plates, I told him brand new cars aren't registered yet, that's why I had no registration. He took all the paperwork back to his squad car, I think he was hoping to find the worst. I explained to K that she didn't have to worry, the guy was just a jerk and it would be over soon. She was afraid I was going to jail, I assured her that that was going to happen was that I was going to have to pay some money. She then got upset and said that D was going to be mad at us, I told her that there was no reason to be mad, and that D was going to be more in shock that I got a ticket.

After what seemed like hours later the cop walked back to my car and told me that the car checked out (really?) and handed me back my paperwork. He told me to make sure I put on the plates when I get them (what else wold I do with them?) I didn't say a word, I waited for the ticket, took it, said goodbye and went on my way. Under my breath and out of range from my little passenger I told him exactly what he can do with the ticket, the smartass look on his face and his own fist. It was quite disgusting, even for me. I immediately called D who was in fact shocked.

I waited the few weeks for the ticket to be in the system and nothing, apparently Mr. Personality was late in handing in his tickets. I kept checking and still nothing. The date the ticket was due was approaching and I had no idea what the hell to do so I called the number on the ticket. After about an hour I was connected to a nice woman who looked up my information. "Nope, nothing here" she said. I told her that I had been checking the website everyday and nothing. She told me that I was doing everything right and suggested that I come down to the courthouse a few days before the date to pay the fine (or fight the ticket) and to find out what was going on. That was the beginning of December and the date on the ticket was December 18, 2009. A few days later it finally showed up online and then in the mail. My "failure to obey right turn only" ticket was going to cost me $275. F that!! I'm fighting it, I entered the info online and got a court date for March 26, 2010.

Then I told everyone the story, they all had similar stories about not being able to fight anything lately because the city was so underfunded. I started thinking about how this would work, I'm sure the guy would show up and even though I had a valid point I still did not turn right in the right turn only lane, it didn't matter how many pictures of the intersection I had. A few days before the 26th I went online and paid the ticket, I didn't want to but going to court would have been a waste of time and honestly if I saw that mean bastard again I don't know how nice I would have been, he made my daughter cry!! In a room full of police officers that would have been a mistake. Lesson learned. Besides I really had no right to fight the ticket, I actually did the thing I got caught doing. A few days ago I got the thing in the mail for traffic school, it said I must immediately sign up for a class either at a traffic school or online. No choice there, I can relax on my couch with a glass of uh, some beverage and take my time. The list for online choices was huge and I opted for Online Comedy Traffic School, I mean really who wouldn't choose that option? I completed the first chapter and then got bored, it wasn't funny. Besides I have a while to complete it.

This "class" will ensure that the points from my ticket doesn't go on my license and that my insurance rate doesn't go up. How about the fact that I have never gotten a ticket before and I obey all (OK, mostly all) the rules of the road. Do I really need to sit in front of my computer for hours to read shit that I already know? Can't I just give them my $19.95 and be done with it? Will taking a 50 question test make me a safer driver? Of course not. What if I did fight it and was lucky enough to have the cop not show up? My ticket would be erased like it never happened. I don't understand the reasoning behind the coin flip outcome of moving violations: either you pay lots of money and must complete a course to prove you are a safe and better driver or lucky you, the ticket is erased and you are free to go. There is no difference on the infraction yet the outcomes are completely opposite. Why don't they base the outcome and the cost of the ticket on your driving record. That way you have an incentive to drive safely. Right now you have a 50/50 chance to get out of a ticket which is not really an incentive to be a safer driver.

Seriously, if I could just rule the world for a little while things might make more sense. Of course if I have gotten a bunch of tickets prior to this one I would be singing a different tune. Still this reasoning makes sense. When I told my dad that I paid the ticket he said I should have called him, his friend gets out of paying tickets all the time. He calls this place and for a fee they will get the ticket erased. My dad said this guy does this all the time, seriously, how many tickets does this guy get? Is he a better driver? Clearly NO! If this wasn't an option and he had to pay based on his priors he wouldn't be getting pulled over every other week. I like my idea, but the sign on my door does not say Supreme Leader of the World.

Will I be even more careful than before? You bet, but that doesn't mean I won't make a mistake now and then. Is that right? No, I really don't think so, I also don't think the way the system is currently set up makes any sense.

I'll do my comedy traffic school when I have the time and I'll get through it, like I always do. I'll do my best on the road, like I always do. If I get pulled over again, I won't talk back to the cop, I'll hand over my info, accept the ticket and call my dad immediately. While I pretty much always do the right thing I have an overwhelming disdain for injustice. I find it slightly ironic that the one time I plan on fighting an injustice by not doing the right thing will actually involve the judicial system. I don't know if this says something about me or our legal system.

Either way I know it won't happen on the corner of Santa Monica and Fairfax.