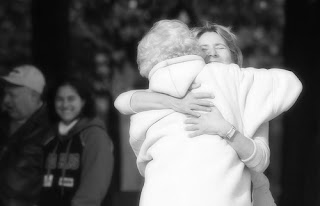 So by now, anyone who has read any of my previous rants, or posts as I suppose they could be called, knows that I have a pretty sizable Facebook addiction. I don't necessarily think this is a bad thing, in fact I've turned into quite the virtual social butterfly. I have an opinion on everything and rarely keep it to myself, where would be the fun in that? Anyway, I love catching up with friends old and new, from right and left coast and even a few in between. I am so enamoured with Facebook and unashamed to admit it. I've said it before but it bears repeating: where else can you get a second chance to reacquaint yourself with your all the characters from your previous chapters? Short of waking up and finding yourself in a movie a la "Peggy Sue Got Married" when an adult Kathleen Turner wakes up after passing out at her high school reunion only to find herself in her own past. The ability to go back to the past with the benefit of my life experience is like a dream come true. No longer being shackled with a dysfunctional family (not that we're normal around here) gives me a strong and clear voice which I like to use when I'm arguing politics or cooing over baby pictures. I do both with a similar gusto.

Facebook is also good for finding those friends with whom you've lost touch and can't find on places like zabasearch.com or by googling. I think by now I have located all the players in my life story, including Starter Husband, who I found while bored one day. Actually last Wednesday my list was finally made complete. I had been searching for years to find my childhood best friend and next door neighbor AW. We had both moved out of our respective homes as did our parents. I had no idea where she went, where she ended up or what her name was now. I suppose it was the same for her, I had not only moved around in New York a few times but I made it all the way out to California. I had married, divorced and married again moving each step in that process as well. To make it worse there was a time when Evil Stepfather made us all use his last name, you may read all about my issue with his name here. Life had taken us in very different physical directions and we were both impossible to find.

Along came Facebook, within days of joining about 2 years ago I had a nice little group of about thirty friends, every day more were added, D had joined way before me and had hundreds of friends. I trolled his friend list and soon my numbers added up, I was exploring one day and stumbled upon a page that was created for the people who grew up in my old neighborhood. Perfect! I recognized a few names and promptly added them, that list grew and grew and soon I had most of the kids that went to elementary school with me as friends. I kept searching for AW but nothing ever came up. She was a year older than me so I never saw her tagged in class photos, to make matters worse she didn't go to my high school, she went to a special high school for gifted artists.

We were thick as thieves and spent much of our childhood together. I would take refuge in her house while hiding from Evil Stepfather and she would do the same in mine when her mother was mad at her. Her dad was the coolest guy I knew (next to my own dad, who by that time I think I stopped seeing in an effort to protect myself from torment in my house). Her dad took us to White Castle for sliders. He took us to Shea to watch the Mets and every Sunday I would beg to join them at the flea market where he sold movie and sports memorabilia. I just wanted to be with them, AW was a better "sister" for me and I adored her father. In fact, I would spend most nights dreaming about what would happen if my mother and AW's father fell in love and ran away together (taking us, of course). I believe to this day that they would have been truly happy together, something that my mother has never known. Obviously none of this happened, it was a nice dream though.

So last week I did another search for AW and to my absolute delight a new profile popped up with a picture of what I was pretty sure was my long lost friend. I clicked on it and sent a brief message asking if it was my AW. The next morning I was thrilled to find out it was. My Facebook life was now complete. We immediately started texting and emailing, our ridiculous schedule and children made phone calls tricky at first. I think it was Monday when we finally spoke although it feels like no time has passed at all. We went right into the details of our lives, many of them scarily similar, even down to the modeling careers of our children. It's like we're kids again, she has not changed at all, in body or spirit. Really, I've seen the pictures, she looks exactly the same and sounds like the happy girl she always was. She lives near my dad too, so the status of the visit we were thinking about taking this summer went from "maybe" to "definitely." This would also afford the opportunity to see other besties that ended up down there! We discussed our feelings on child raising and wouldn't you know it we were in complete agreement. She's raising her son with the same philosophy that we use with K. Our kids are even a year apart just like us, wouldn't it be just perfect if they grew up and got married? Carrying out the destiny their grandparents were not able to fulfill? Yes, I know, I'm getting carried away, can't help it. I just reconnected with the one person in my life who was with me through it all, the ray of sunshine in the thunderstorm that was my childhood.

Once again I have written another homage to Facebook, this one is surely deserved. It has brought me back full circle but this time I am in charge and this time we will not lose each other!

Each friend represents a world in us, a world not born until they arrive, and it is only by this meeting that a new world is born.