No thanks, my plate is full enough! 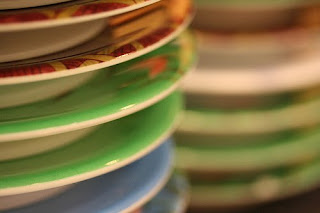 I mean this literally and figuratively. Literally because this week has been all about eating, I don't think I can take another day off anymore. I better figure out a better way to manage K's time off better or this summer is going be brutal. Seriously, I have been out to lunch every day since Monday, couple that with the Passover and Easter candy we have here, I don't have a chance. Also K loves to have treats and a new frozen yogurt place opened up near us and we both love it. I'm so glad she's going back to school tomorrow, although I did adore the time we spent together I can now go back to my usual low carb and sugar free diet.

I can also go back to my usual daily activities (most of which do NOT involve food) running all over the place with K is exhausting. I don't mind doing that after school for her as long as I get to do my own crap. I feel like we crammed a months worth of activities into just one week and I don't know why. I planned on taking it easy with her but I felt bad, I didn't want her to go back to school and say she did nothing. She even had a few sleepovers, giving D and I some much needed time out, which was great.

This weekend we were going to take it easy and that didn't happen either. D took most of the day off Friday so we all went out and about doing some errands and shopping, we ended up in Santa Monica having gelato. K also convinced D to sleep in our bed that night, while it's always sweet to have her in bed it's painful and I usually end up with no sleep and a smack (or two) in the face. Saturday we did a few things around the house and then went off to the Grove to see "How To Train a Dragon" but not before buying snacks at the Farmers Market. After that we went out to dinner, thankfully only K had dessert. We came home and watched the "Ten Commandments" which I wrote about yesterday, I guess I did have dessert in the form of alcohol. While we watched (and drank) I put together a "Spring" basket and filled 20 colorful plastic eggs with tons of candy for K to find in the morning. Since we don't celebrate Easter I had to be creative to avoid being a hypocrite. I felt bad because every time we were out she saw all that Easter candy and honestly it was all the stuff I loved as a kid. She had so much fun looking for those candy filled eggs. After she found them all she insisted on hiding them for me. I think she only opened one of them, she had more fun playing with them and drawing little chicks with bunny ears. Whatever makes her happy.

Today we went to our favorite hamburger dive on the Santa Monica Pier, we go there on Easter every year. We ended up there one year on Easter and it was great, no problem getting parking or a table. For some reason the Pier is still always crowded though. K had a great time following our poor waiter around and telling him every single detail of her life at the moment. She wheeled around on her Heelys and put on quite the show. I wanted to get some pictures and for the most part she was a willing participant. Until we got to the Pier, she lost her audience and was not cooperative. I have been trying to get pictures of that girl on the Pier for years and have always been unsuccessful. Even D tried to intervene with no luck. How is it possible that my daughter, a girl who has been photographed by some of the worlds best photographers would not let her own mother take her picture? This happens all the time. I have some cool ideas and just want to carry them out. I scrapped the photo shoot plans and said I would just come back and find another model, I know a bunch of them. She didn't like that, she didn't want to do it but she didn't want anyone else to either. We left the Pier and let her climb one of the play structures that was by the car. All of a sudden my muse returned, she was posing and glamming it up like it was a job. Cool. She even got creative and went all out for me. I have to say that I was thrilled and got some amazing shots of her. I even got a great one of her and D, but I always do, they're both so cute.

I thought by letting her wheel around on her Heelys, letting her eat a mountain of shrimp (her fave) for lunch and buying her cotton candy and salt water taffy (my faves) that I would be excused from cake duty later. I stupidly promised her I'd make a Spring cake. No such luck. As soon as we came home the Great Cake Inquisition started: "when are we going to make it?" "can I lick the frosting?" what color fondant are we making?" "when?" "when?" "WHEN?" Clearly I was not getting off the hook for this one.

Our previous cake making experiences were tough but extremely successful, this one was the opposite of that. The cake stuck to the pan, the top of the green food coloring came off in my fondant and the now extremely green fondant would not cooperate. I could not get it right. I had to put K to bed and promised not to decorate without her. I somehow managed to get it right and rolled out a perfect sheet of green to cover the broken cake. But not before having a fit or two and completely insulting my kitchen. Sorry D! It actually looks pretty good, I bought a bunch of yellow and pink Peeps to adorn the Spring cake, what else says Spring like day glow pink Peeps?

So now after a week of eating too much, doing too much and talking too much, I am exhausted. I cannot do another thing. I am completely uncomfortable both mentally and physically, I feel like my clothes are too tight but not in the same way they were a few weeks ago. I feel like my mind is a mess with all the things I never got accomplished this week. I had no idea what I was going to write about today. Surely my fried brain had nothing to offer, I was going to write that I'm full in every way possible and need a night off. Maybe tomorrow. I have a weeks worth of errands, cleaning, emailing, car washing, organizing and some other stuff I can't remember right now. What I will do first is relax for a bit, put all K's candy away (and out of sight!) and go back to my normal zone-like diet. I do not want to rush anywhere. I've been running around fulfilling ridiculous obligations that I have put on myself. I need a moment for myself.

It's going to have to wait, I preemptively shot myself in the foot once again. D and I I are signed up for Traffic Safety at K's school tomorrow and Tuesday because no one else had.

At least we'll be together.

I better have a GIANT coffee this time.
Posted by MicheleB at 8:07 PM