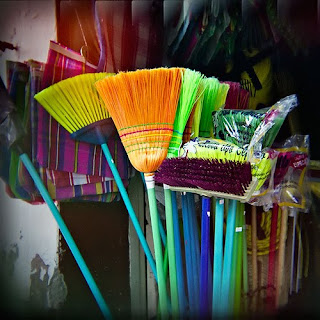 Today we had our rescheduled appointment with Dr. Phil. I wasn't sure how this one would go, for one thing K climbed into bed at 3:00AM and kept me up with her teeth grinding and kicking (I would have moved but it was sweet the way she curled up next to me) and it was scheduled for 9:00AM, which meant if I wanted to avoid traffic, get parking and a latte I had to leave before 8:00AM. Pacific Coast Highway traffic with no sleep can sometimes be dangerous. It wasn't too bad today, my iPod instinctively knew what songs to play and I didn't have to fight too much with the Sync chic. Besides the ocean was beautiful, the angry waves made for some beautiful whitecaps. I made it on time and unscathed, parked for free and got some java.

It's always a mystery where we will go in our session. Today D started with my email to my MIL, we talked a little about that, somehow the conversation steered back to my mother and why she gets me so angry. Then I brought the revelation I had about her keeping Evil Stepfather's last name, we discussed him for a bit and that's where we decided to park. Not really the direction I wanted to go but since we ended up there organically I went with it. I hate when I bite myself on the bum with my stupid insistence on organic conversation.

It's not like I'm avoiding this topic, in fact it's just the opposite, I'm sick of it. It's been talked to death in previous sessions with a therapist I saw after Starter Husband and I separated (I am such an LA stereotype). I don't want to go into specifics but clearly this wasn't a nice man, this is evident by his nickname and the fact that I cannot even say his whole name. Did growing up with this man in my house give me a "problem with men?" Of course not. Was it completely dysfunctional? Absolutely. Unhealthy? You bet. Did it scar me for life and cause all the problems I've ever had since? No. I believe this implicitly. I understand that what happened to me as a child was not my fault and I have not spent my life trying to make up for it. I'm not getting back at all of humanity because my mother married a complete jackass. I understand that growing up in such a house can cause irreparable damage to a person if they don't recognize and acknowledge the issues and then deal with them accordingly. I believe I have been dealing with them recently and living authentically at the same time.

I don't think the issues with my MIL are a result of my early life. I believe the refusal take her crap and play into the victim mentality are merely a result of my desire and insistence on living life as your true self. Sure maybe the fact that I didn't get to do that as a child has made this more important to me now but I don't see that as a bad thing.

Sometimes it may seem that I am sweeping this Evil Stepfather crap under the rug, but this is not the case (at least it isn't to me). I just refuse to spend any of my present living in my past. Dr. Phil wants to further explore certain aspects of this and while I see his reasons for wanting to doing this I don't see how it's going to do anything except dig up things that have been forgotten for a myriad of reasons. I trust my brain to keep unwanted memories locked away. I don't consider this sweeping it under the rug, or denial in any way. I think of it as a locked door of a room I have no need to enter. I don't have a PhD, MSW or any initials after my name but I know what works for me. This doesn't mean I won't discuss why he thinks this is important because I trust him wholeheartedly and the work he does with us has helped tremendously.

The only thing under my rug besides dust is most likely some Polly Pocket shoes and some old Fruit Loops.
Posted by MicheleB at 8:17 PM