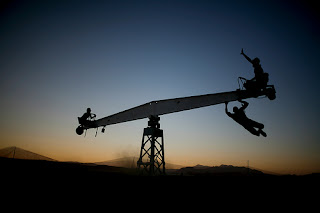 My life, as well as everyone's I suppose, is full of highs and lows, ups and downs, good and bad. I've spent way too much of my life focusing on the bad and now I only want to experience the good. I know that is probably impossible but a girl can hope right? I've been having so much fun recently catching up with long lost friends I keep forgetting about the issues that are currently swept under my rug. They aren't dividing my house anymore so I tend to forget them. Unless of course it's Wednesday and we're at Dr. Phil's. Although today was Wednesday we did not go to our appointment. We're cured! Just kidding, D had to reschedule due to a scheduling conflict.

I thought a lot about what he said last week, I "marinated" with it for a while (a Dr. Philism). It was not easy as it was mother-in-law related. First he asked me what a confrontation with her would be like, I told him I most likely would not go after her the way I should, the way I would be justified in doing. I might be angry and pissed off but I'm not disrespectful, even if I don't respect her. He said what I need to do is to write her a letter, a no holds barred document that says everything that I need to say, in my language. Which basically means I should write a letter that will rip her apart. After writing this manifesto of hate I should promptly rip it up. Somehow this will make me feel better. I should have told him that it would not make me feel anything but annoyed that I can't say these things in person. I know this because the symbolically written diatribe is practically an invention of mine. I've been doing it for years and the only thing it does is waste paper. The OCD in me needs something a little more concrete. Either I will actually have to tell her off or I'll just have to deal with it. I like one so much better but nice Jewish girls don't yell at old ladies.

Then he said something else, what am I waiting for? Am I waiting for a response from an email I replied to weeks ago? Hmmm. Interesting thought. He was suggesting I call or email her, a sort of kill her with kindness approach. Or at least a completely disarm her as it would be completely unexpected. The thought of it actually made me laugh out loud. Right there on the comfy therapy couch, I laughed as I held my latte, I believe I even said "that's so not gonna happen" but in a more me kind of way. He also gave me a bunch of awesome quotes that I forgot to put on Facebook. Let's see if I can find one. Hold on.

Oh I love the internet, I couldn't even remember the philosopher's name so I looked up philosophers up on Wikipedia, scrolled the list and found it. It was a quote by Philo, I think he paraphrased but here's the actual quote:


Be kind, for everyone you meet is fighting a great battle

Yeah, yeah, yeah. I get it, we all have shit that we're going through, apparently I need to be more mindful of this when it comes to my MIL. Fine, I can do this. She actually has lost a lot by her actions and I don't think she even realizes it. When she does, it will be epic. I took this into consideration. Then I thought about Dr. Phil, he knew that a face to face berating wasn't in the picture and he knows me. I always do the right thing, even if I don't want to, I'll still do it but I won't like it. So today, instead of going to therapy I sent my MIL an unprompted email with a picture of K's poster currently hanging in Target. I told her that I heard she was feeling better and asked about a trip she was supposed to take. I could actually feel Dr. Phil's satisfaction in this as he sensed this lack of disturbance in the Force.

Wow, I was so impressed with myself! I didn't let this take up any space in my head, I didn't get angry with myself or my MIL. Instead I had an awesome conversation with P, my very best friend from middle school, another wonderful Facebook connection. I hadn't spoken to her in years and it was so much fun catching up, we actually need to finish tomorrow, life has a way of interrupting my reunions. All of this catching up has given me a high that just won't go away.

I didn't even bother analyzing the reply to the email I sent because it doesn't matter anymore. I am at a better place. A place that even as of last week I never thought I'd see. I have completely (or almost completely) given up the anger. I'll never get to that low again but if I do I have so much to bring me back up again, and the list starts at home with D and K and now stretches across the country. I am blessed with a wonderful family and the most amazing friends. Real friends that don't let things like 20 years or 2500 miles get in the way.

Things are certainly looking up.
Posted by MicheleB at 1:40 PM