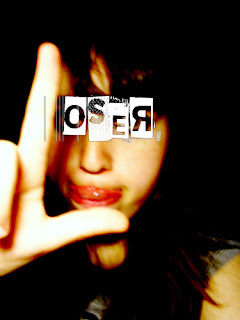 I don't watch that show "The Biggest Loser" but I've seen it teased and I get the general premise. A group of overweight people compete to win $250,000 by losing the highest percentage of weight. They do this with temptations, challenges, workouts and weigh-ins. The trainer for this show is a woman named Jillian Michaels, apparently this woman had a weight problem as a child, discovered kickboxing and now has a rocking body. She also peddles her own brand of diet pills on her website, in February of this year a Los Angeles County lawyer filed a lawsuit against Michaels for false advertising the suit seeks prohibition of sales as well as $5 million in damages.

That's about all I really know, I've seen commercials with her for diet things but I don't pay attention. I also see her picture sometimes in my trashy but beloved OK magazine, that's the extent of my knowledge on this person.

Today Huffington Post ran a story on a recent interview Michaels had with Woman's Health:

'Biggest Loser' trainer Jillian Michaels has a hard little body and she plans to keep it that way. Michaels, 36, tells Women's Health she is unwilling to become pregnant because of the way it would change her body.

"I'm going to adopt. I can't handle doing that to my body," she told the magazine. "Also, when you rescue something, it's like rescuing a part of yourself."

Michaels, who is now 5'2" and 120 pounds of muscle, was overweight as a teen. She said she once weighed 175 pounds but lost the extra weight with martial arts, which she has practiced for 20 years. She is currently embroiled in a lawsuit over the efficacy of her diet pills.

Michaels also reveals in the interview that she dates both men and women.

"I've been in love with both," she said.

I posted this on my Facebook page and it set off a string of 25 disgusted comments plus one that didn't really see our point of view. For the most part we were all pretty sickened by her words. I understand that there are some people who do not want kids, that's their business, there is no right or wrong on this issue you simply make the best choice for you and or your partner. I feel the same about marriage but I believe I already discussed that. Saying that you are unwilling to have a child because of the way it will change your body and you won't be able to handle it seems pretty selfish. What does that say about Ms. Michaels own mother? She says that she would adopt because she can't deal with the effect on her body, nowhere in that sentence does it say anything about giving a child a loving home. She says "Also, when you rescue something, it's like rescuing a part of yourself." First of all a child is not a thing, having a child, through birth or adoption is a selfless act not a selfish one. If she has a problem with pregnancy and her body changing she should not have a child at all, the first rule of parenting is putting someone else's needs first. If the worst thing that happens to you after a child is a change in body shape than consider yourself lucky. Having a child is a 24/7 commitment, it means giving up a part of yourself sometimes, and for most people it's done without question (at least most of the time).

We live in a country of choices and it is absolutely her choice to not have a child. She doesn't want to wreck her body? Again, her choice, a bit selfish in my opinion but isn't that the way of the world now? It's just shocking that she feels the need to let everyone know why she feels this way. The thing that got me was the "rescue" comment. Everything about her comments make me think that if she does ever adopt a child, they will spend most of their life hearing about it. This is all my opinion but after reading about this woman, these comments weren't unexpected. I hope I'm wrong, if she does adopt a child I hope it's for the right reasons, children have enough hurdles to jump these days.

I suppose what this all comes down to is choice, we make a choice and hopefully we are happy with it. We should all be grateful that we live in a country where we have the ability to make these choices and the freedom to voice our opinion if we disagree with them. We've worked hard to have these freedoms and may we continue to do so.

My advice to Ms. Michaels is to talk with her mother, ask how she felt when reading the comments about why her daughter doesn't want to have a child. There is no such thing as a perfect body, eventually we all get older. It's sad to think that one day Michaels will realize that she spent a lifetime molding and shaping her body all the while letting that body become the focus of her life. Personally, I don't see the appeal of being a slave to my own form.

A soft belly will always beat a narrow mind.
Posted by MicheleB at 8:26 PM