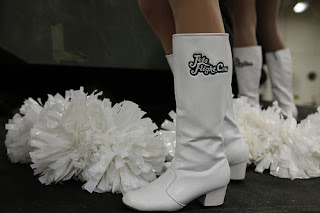 Sunday was the Spring Carnival at K's school, it's not only the biggest fundraiser of the year it's also the most fun. Who doesn't love silent auctions, game booths, junk food and face paining with all your friends and classmates? At first we weren't supposed to be there. K was booked on a job and then released at the last minute (which prompted my Friday carbfest). I was unable to commit to volunteer which I'm sure put me on the shit list of all the "super-involved" parents, but I didn't care. I do enough, I happily (well not that happily) handed in my check for the "Annual Gifting Program," I buy overpriced paperback at the Book Fair, I always volunteer to do traffic safety and I have enough "school logo" items to look like I work at the school.

I'm sure it's the same at all schools, there are those parents that feel the need to do it all and are on every committee, every function, every event. They are the ones that give people like me friendly but condescending looks. Too bad this is a small school and I know their secrets as well as all the stories about their "perfect" kids. I do what I feel is the right amount of volunteering for my family. On Saturday we went to a birthday party for one of K's classmates, all the parents were talking about the next day's festivities and their volunteering slots. Oops. I told them the reason I couldn't sign up and I was given a pass. They think K's modeling stuff is cool, they were happy that we were going to be there so our kids can all play together. Then they talked about the cakes they were baking for the Cake Walk. Oh crap, I told K that we would do a cake for the end-of-the-year party and not the carnival. Once she hears her friends are making cakes, she is so going to want to make one. I preemptively decided to tell her that we could make a cake, we'll figure out the design later. She was excited, then the whole impromptu Grilled Cheese party happened. The plan was to go to the store, buy what was needed, go to the Grilled Cheese party (because I was NOT missing that, it was so important I capitalized it) for a bit and then come home and bake.

We came home and dropped off the cake supplies, by then we had decided to do the Book/Movie theme and The Wizard of Oz immediately came to mind. We discussed the design and came up with a yellow brick road over a green field (this would be perfect for the green fondant we already had left over) with ruby slippers standing on it. Perfect. Off we went to our friends R and N, I reminded D that we could only stay a couple of hours. As soon as we walked in the door they told us that they were making mojitos. Hmmmmmmmm, that changed everything, what was I supposed to do? Mojitos and grilled cheese trumps baking. We would just have to wing it. We stayed later then originally planned and I had three mojitos which was more than I had planned.

K was half asleep when we placed her in her bed but wanted D to stay and cuddle for a while. I had to decide what to do, I needed to finish my blog for that day, make a cake and pass out. I decided to at least try and get the cake in the oven. I prepared the batter and realized that I put in whole eggs instead of egg whites, D was still in with K so I was able to remake the batter without any ridicule. I put the pans in the oven and finished my blog. By the time the cakes were done and cooled I was asleep on the couch missing MGMT on SNL (thanks goodness for DVRs).

In the morning we all got to work and the old saying "too many cooks" didn't apply, it was chaos but it was fun. D decided he was going to tackle the ruby slippers and made a small batch of fondant, he did pretty well for a rookie. In the end we were happy with the results. We got dressed and headed out the door. D dropped us off at the school so we would have less of an opportunity to drop our cake. We found out where all the other cakes were and and learned that we were too late for the contest, the judging took place at 10:30AM, right around the time I was building the yellow brick road. That didn't bother us (we knew our cake kicked ass!) we were worried it wouldn't make it to the Cake Walk, they assured us that it would. Great, I brought it out to the prize table and went off to search for D. I think I got about ten feet before I spent $30 on a first grade tote bag. I found D and K waiting at the face painting booth, he already had a bunch of tickets in hand.

We spent the day eating, drinking and playing games. We saw friends, neighbors and classmates who were also eating, drinking and playing. The school was raking it in and we were happy, I don't know how many times we went back to buy more tickets. We didn't care, all the money comes back to us when K goes to dance, PE, art and computer lab. We didn't complain about spending $4 for a tiny latte because it meant K has a school nurse to go to when she falls (and she falls a lot). At the end of the day I don't know how much we spent but it was plenty and that was fine with us. We did our part, as far as I'm concerned enjoying the day and making a sizable "donation" better served the school then the two hours I would have given. Plus the Cake Walk raked in a ton of cash, we actually couldn't leave the school until K saw our cake go home with a happy family.

All in all, it was a lovely day. K still has her braid of blue and green, we do not have another cake in the house and in a few weeks I'll have another canvas tote bag with K's whole grade on it (to match the one I bought last year). We supported our school and had a great time. If one of those pseudo "alpha moms" dares to look at me in that "I do more" kind of way I will just laugh (and most likely roll my eyes) and relish in the fact that I do not need the whole school to know the scope of my involvement.

I actually graduated from elementary school a long time ago, maybe it's time they did as well.
Posted by MicheleB at 8:08 AM