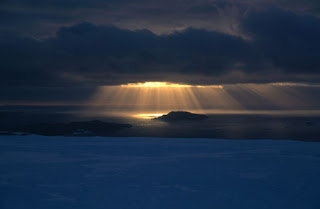 I look forward Saturday mornings, D takes K to her piano lesson and I enjoy a quiet few hours to myself. This morning I dedicated the start of those hours to catching up with everyone I've ever known via Facebook. I did some emailing, read a few news stories and searched for my iPhone which contained messages that needed to be returned. One of these was from my mother, I was about to call her back but I was unable to move. I just sat there staring at her name on my phone. Then I was hit with a realization that was long in coming. She kept her second husband's last name. I held a constant stare. She kept HIS last name. I suddenly felt sick thinking about this. SHE KEPT THE NAME OF MY TORMENTOR. I put my phone down and never returned the call. Then I sent a text to D and told him my morning revelation, he thought it was quite an epiphany for my conscience mind. I do love a smart man.

I've made comments to her in the past but it never really hit me. Lately with all the emotional growing I've been doing, lots of things have surfaced including memories that I have forgotten for a reason. I sat there stunned. Every time I see her name I am taken back to a place I left years ago. Every time I have to call her from my car I have to say his name which for some unknown reason she kept. This goes deep, I have not repeated this man's name in decades, yet every interaction I have with my mother is a constant reminder of the one person on earth whose death would make me happy.

I so desperately want to call her and ask again, but this time with anger behind it instead of the usual casualness, that's the only way she will know that I am serious. I'm sure I'll get a stupid answer like "I never knew how" or worse "I never thought about it." I wonder if she knows the effect it had on me, or if she ever thought about it. I realize now that besides all the other reasons I have to be angry with her this is one that could have been avoided. At the end of their marriage all it took was some prompting from me to kick him out, it was that easy. Clearly she had no love for this man, why on earth would someone spend every single day of their life with a changeable reminder of a terrible person? If for some reason she had tattooed his name on her body would she have kept that as well? Even Johnnie Depp changed his "Winona forever" tattoo, and the worst thing she's done as far as I know was get busted for shoplifting.

I can't believe I never realized this. She is a walking, talking reminder of my dysfunctional youth. It's like someone put a "kick me and keep me down" sign on her back only she knows it's there. It's no wonder I cringe at certain moments like when she repeats her name, calls me or sends a package to K. I am dumbfounded as I write this. I spent the whole day thinking about this. We all went to a birthday party and had a nice time in a beautiful park talking to a few of the cool parents from K's class. The whole time I kept thinking do these people have lunatics in their family? Are they able to to bring issues to the table and discuss them? Maybe on the next playdate I'll ask one of them. The party ran late and we missed the Grilled Cheese Festival, some friends who went and were disappointed by it decided to have their own contest had invited us over. I was tired but we all needed a change of scenery. I'm so glad we went, I was in cheese heaven, still numb from my morning realization, the three mojitos I had helped immensely. So did the amazing grilled cheese creations our friends cooked up, I think if any of the three varieties of sandwiches they made were in the contest they would have won, hands down!!

I was happy for the distraction and realized that I have a wonderful life out here in Los Angeles. My friends have become my family and I enjoy each and every one of them, their differences and quirks make them all special to me. These are people that, in a way, were hand picked by me to fill a void left by the happy family that I never had. As we ate (and ate and ate and ate) and drank we watched our kids play, we talked about music and movies and the stupid things that happened to us during the week. I didn't have to think about the stupid last name my mother still goes by, it didn't matter. My life is about moving forward now, enjoying the good times and living in the moment. Sharing food, drink and memories with people who we actually want to share our time.

The next time I talk to my mother I'm going to tell her how absurd it is that she has branded herself so poorly. Maybe she feels the need to punish herself, it's a ridiculous cross to bear. It's one thing to not go back to her first married name, one we shared at the time, she also had issues with her first husband, my dad. Too bad, it's the middle name we gave to K and one that I keep as well, it would be a nice link to share with my mom's beloved granddaughter. Why wouldn't she go back to her maiden name? It would have been a loving tribute to the parents that she loved and adored until their death. Instead she chooses to honor a marriage that was the better choice to being alone. Sounds insane to me. If it was a financial choice (and I doubt it) I would think that the funds for her shoe obsession could have been put to better use by cutting the link between a wretched past and a free present.

While talking to D this afternoon he said "...a rose by any other name would smell as sweet..." Umm, I have to disagree, first, this was no rose garden and second, there are some stinky flowers. Besides how sweet does a rose smell after a dog pissed all over it?

Not that great huh?
Posted by MicheleB at 10:44 AM