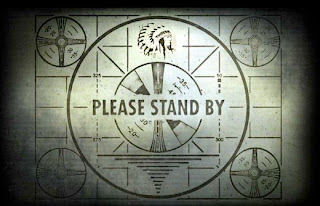 I was going to write about our therapy with Dr. Phil today and how different things are now compared to a while ago. I was going to write about how we communicate with each other instead of at each other. I was going do this while listening to a Wilco concert streaming live from Concord, New Hampshire. Then my computer became uncooperative, the only thing that worked was the concert. After it ended I rebooted and nothing, no internet. I even went over to our desktop which was my old computer, nothing. I did all the things D tells me to do, restarted, checked to see if I was on the correct WIFI, checked and unchecked "work offline" all the same crap that we always do. Nothing worked. Then I unplugged the router and modem for a few minutes, restarted the computers and voilà, internet.

I was so pissed, if this was something that happened occasionally I'm sure it wouldn't be a big deal, but things like this happen to me every single day. When I wake I have to deal with Vonage, which likes to shut off for no reason at all, the calls then get forwarded to my cell phone, so my morning is something like this: House phone rings, as I run to pick it up my cell phone rings, I'll then run to get that and as I reach for it the call goes to voicemail. Then I will call back on my house phone while whoever calls calls attempts to call me back, this will cause the incoming call to again go to my cell phone. The ridiculous part of this is that it happens every day. I try to remember to reset the Vonage in the morning, but clearly I am not a morning person. In fact one morning I was particularly out of it and preemtively reset the Vonage while I was on the phone. I wouldn't mind that so much if I could just answer the calls on my cell phone, but I have terrible service at home.

After that fun, I get into my car and attach my iPhone to my car's USB port so I can play music through the car's Sync system. This system allows me to be hands free to make phone calls and music requests. All I have to do is hit the media button and say "phone" the Sync chick will say "phone" back and I make my request, she dials, I talk. Easy. Not for me. I do my thing say "phone" and she says "there is no phone connected." I say "phone" again and she has the nerve to tell me that there is still no phone connected. This happens a few times until I scream "PHONE!!!" and then pull over to unplug and plug the thing back in. That seems to work. Until I actually try to have a conversation, then I usually drop a call about 4 or 5 times before the conversation is finished. To calm down I like to play music, and the Sync is perfect for that, if the iPhone is in the USB I just say "USB" and my Sync chick repeats it back, I can then say "play artist Wilco" or "play song On and On and On" or "play album Sky Blue Sky" and it will. Most of the time. Sometimes she tells me that "the is no USB device connected" oh yes there is, I can see it!! I'll ask again nicely and she does not comply. Then I yell at her, nothing. Again I have to pull over and pull the thing out and put it back in. Finally. Most of the time it will play what I ask, sometimes I will ask it to play an artist, I'll hear a few songs and then it plays what it wants. This doesn't bother me, I only have cool music on my iPhone :)

I'll come home and start my afternoon and evening activities which usually just involve homework, playing and dinner if we aren't at a casting. Homework has it's difficulties but they aren't technical. Although I did post a Facebook status a few weeks ago about Listening 1.0 not being compatible in Daughter 6.0. I got so many replies so maybe that problem can fall under the technical category. We're working on that. After homework and hanging with K for a bit I start dinner. I'll let her help me with the planning and prep, watching the Food Network has made us both more creative in the kitchen. We will put our masterpiece in the oven or on the stove and about 5 minutes later the smoke alarm will go off. There is no smoke, there's no way to burn something in 5 minutes, it's just another thing in my house that isn't compliant. It's a good thing that it come off easily, in fact it's currently sitting in my bedroom. D used to laugh at me until it started happening to him, then it wasn't so funny. Well at least it was to me.

After dinner I'll clean up and D will play with K, I actually like doing dishes and I always do them by hand. It's a form of relaxation for me but it might just be because I'm afraid of another non functioning appliance. After the dishes are done I will run the garbage disposal, putting food in the garbage is gross right? Isn't the disposal for food? I'll flip the switch and it will shred the remains of our dinner to pieces until it makes that noise. Oops. I don't like to deal with this, D will come in and stick his hand in the drain and pull out something that used to be food. Yuck.

Then it's bedtime and we say our goodnights and snuggle for a bit. After that D and I play dueling laptops, D will be finishing up whatever movie he worked on during the day and I will finish writing. We usually do this side by side, often "talking" to each other on Facebook. We get quite a banter going sometimes. It's usually pretty quiet while we are both working, we do have music playing, I need that. After a while one of will say "uh, do you have internets?" Yup, you guessed it, to culminate my day of technical dysfunction we will have to reset the internet. On a good night we skip this part, I don't escape unscathed though, if I'm writing this blog I always get a huge red banner error message saying that my work cannot be saved. I then have to cut and paste what I'm writing in a Word document, just in case. I know my tech issues are over for the day when I am able to hit the publish post button and shut down my laptop.

I'm amazed all the things that we have that make our lives easier, I know that I should be grateful for them. When they work, it's all smooth sailing but when they don't it's defeating. I am hit by technical tornadoes everyday, you would think I'd be used to it by now, but I'm not. I expect something to work when I turn it on or plug it in. I am actually shocked every time these things fail me. I should consider myself lucky, I have a full-on IT guy available to me 24/7. Although recently I have discovered that I have become my own IT person. I can fix all my tech issues by simply unplugging whatever is not in proper working order, waiting a minute and plugging it back in. Technologically advanced? Hardly, that's the same method my grandmother used when her toaster or hair dryer didn't work.