Did you feel that? 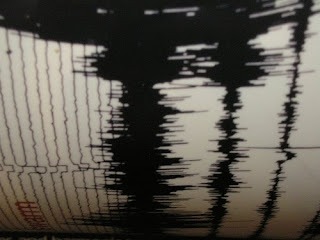 I'm sure by now everyone knows about the ridiculous amount of huge earthquakes happening on our planet. I imagine that some of you have even been in some of them. The 7.2 Easter Sunday trembler in Mexicali was felt by everyone we know here in Los Angeles, fortunately for us we were driving at the time and missed it. That one got me freaked. I started looking up all the big ones in the last few months, the ones in Haiti and Chili were not only over 7.0 and deadly they were in largely populated areas, the damage was severe. Most of the bigger quakes usually take place in less densely populated areas, in my reading I found that there are usually around 14 large earthquakes in any given year, we usually don't think about this because the damage in these less populated areas is minimal. The Haiti and Chili earthquakes were anything but that. The one in Mexicali was bad but the loss of life and damage were nowhere close to the previous two.

I started thinking about them, and then a few days later a 7.8 hit off the coast of Indonesia, a few days after that there were two a 7.1 in Australia and a 6.2 in Spain and then the huge 6.9 China quake. I had an awful feeling of doom that was quite unnerving. A few days ago a friend called with a story about some friend of a friend who got sent home from a job where she researched earthquakes, she was told that the big one was coming soon. Usually I laugh hysterically over these far fetched fear based rumors but it freaked me out. Later that day on Facebook I had a conversation with my friend S who had mentioned all the earthquakes in her status. I told her that I agree something was strange about all this, she recently moved out of Los Angeles to Salt Lake City, she was probably happy about that now. Yesterday her Facebook status was about the 5.0 earthquake that hit Salt Lake City. I'm pretty sure these are not related but if you live in a quake prone city you have to take all this to heart.

I immediately went out and bought an earthquake kit, extra blankets, light sticks and a 3 day supply of emergency meals for D, K and I. Insane? Maybe. Overly cautious? Definitely. Necessary? Absolutely if you happen to live near a fault line, which is anywhere in Los Angeles.

Earthquakes actually don't bother me and I was pretty bummed that I missed the last one, what scares me is "the big one" hitting when I am not with my family. The thought of K at school and D at work is terrifying to me. Last night I had a dream that we were all sleeping and the ground started shaking, we all got up and went towards our "safe place." In my dream I was paralyzed with fear and unable to move. I felt the paralysis take over my body, I felt the urge to move and the inability to do so. I felt my voice straining to get out and I felt myself start to move but in slow motion. When I awoke I wasn't sure if it was real or not. It felt so real and it wasn't out of the realm of possibility. It wasn't a movie earthquake, just a typical 5.something which I have experienced and never worried about. Why now? I'm sure the recent shaking has something to do with it, although apparently there is nothing to worry about.

According to the USGS:

Although it may seem that we are having more earthquakes, earthquakes of magnitude 7.0 or greater have remained fairly constant throughout this century and, according to our records, have actually seemed to decrease in recent years.

A temporal increase in earthquake activity does not mean that a large earthquake is about to happen. Similarly, quiescence, or the lack of seismicity, does not mean a large earthquake is going to happen. A temporary increase or decrease in the seismicity rate is usually just part of the natural variation in the seismicity. There is no way for us to know whether or not this time it will lead to a larger earthquake. Swarms of small events, especially in geothermal areas, are common, and moderate-large magnitude earthquakes will typically have an aftershock sequence that follows. All that is normal and expected earthquake activity.


Earthquake clustering and human psychology. While the average number of large earthquakes per year is fairly constant, earthquakes occur in clusters. This is predicted by various statistical models, and does not imply that earthquakes that are distant in location, but close in time, are causally related. But when such clusters occur, especially when they are widely reported in the media, they are noticed. However, during the equally anomalous periods during which no destructive earthquakes occur, no one deems this as remarkable.

Better global communication. Just a few decades ago, if several hundred people were killed by an earthquake in Indonesia or eastern China, for example, the media in the rest of the world would not know about it until several days, to weeks, later, long after such an event would be deemed “newsworthy”. So by the time this information was available, it would probably be relegated to the back pages of the newspaper, if at all. And the public Internet didn't even exist. We are now getting this information almost immediately.

So there it is, I can blame all my earthquake paranoia on the interwebs, all the "breaking news" and "live from wherever" is in my face 24/7 or whenever I'm in front of my computer (which can seem like 24/7). Before the internet we would only see these images on television but we had to be watching it to see it. Given today's obsession with technology, information is just a text or tweet away. Smart phones are now feeding us information intraveniously, I rarely see a cell phone without a hand attached to it.

This explanation makes me feel better, an actual reason for what's going on in the world. When anything happens within seconds it appears on the front page of Yahoo. When I want to know what's going on in the world I lift open my laptop and I have life in real time with no delay. Does this make me feel stupid about the irrational fears I've had the last few weeks? Not really, it finally lit a fire under my ass and now my family will be prepared in the event of an emergency. Eventually something else will occupy the news and I will move on to worry about other things. At least I won't have to scurry around my house in the unlikely event of an emergency, that's certainly worth the price of admission.

If only they could find a reason for all the traffic. Anyone who lives in Los Angeles knows that's the scariest thing about this city.

I haven't been able to find a traffic kit.
Posted by MicheleB at 1:13 PM