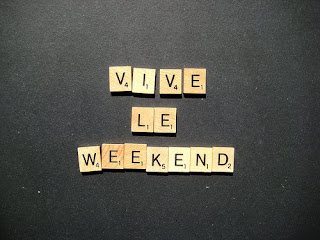 My weekend begins at 3:00PM when I pick K up from school, to kickoff it off we start with our traditional "Friday Treat" and it's always K's choice. I can trace this one back to the first Friday after K's first week of Kindergarten. We discuss the events of the week and our plans for the weekend. If there are no auditions we usually go home and rest for a bit and then get ready for another tradition, Friday night out. I don't remember when this one started but we've been doing it for years, I'm pretty sure the absence of a steady babysitter was instrumental in the formation of this weekly occurrence. We usually end up in the same places out of habit, by Friday evening we are all exhausted and none of us really feels like coming up with something new.

I love these dinners, even though we tend to spend part of it arguing with K who will order something and then decide she doesn't want it after it's served to her, or she'll eat some of her food and then proclaim "I'm DONE, I'm full" but insists on dessert. It hardly matters to me by then, I have had food prepared and served to me along with a glass of something red and wonderful. D is the same way, he'll be on her about eating but will always give in and let her have dessert, her happy smile is not only infectious but it's pretty convincing. We usually get home past her bedtime so with no time for a bath we just place our filthy child into her bed. Finally, for the first time all day D and I get to relax together (unless he has to work and then he's glued to his Macbook). We usually pour a cocktail and chill until Bill Maher comes on, we both love this show and look forward to it every week, unfortunately something about the show, the cocktail and my ridiculously comfortable couch that has me asleep long before his New Rules.

Saturday mornings I get a reprieve as D takes K to her weekly piano lesson, she hasn't been taking them too long but is doing extremely well. In fact a few days ago she was practicing and I thought it was D, then they did a duet that was so sweet it brought tears to my eyes. Her lesson starts at 9:00AM so they are out the door pretty early, after that they have breakfast together, it's a good few hours of solitude, I spend it wisely: I do nothing. I take my time enjoying some coffee, reading up on world news and usually put on a weekly cleansing mask (I try not to scare D and K with my beauty rituals). I take long leisurely showers and actually try to style my hair so it doesn't look like fried straw. It's around this time that I start to miss my family and send a "where r u?" text. I'm always happy upon their return and listen anxiously to K as she describes the feast she just shared with her daddy. I love that they now have their very own weekly ritual, is it strange that all of our traditions involve food? I'm going to say no because I think all Jewish traditions involve food and while D is not a MOT we consider him an honorary member.

After they return we spend some time discussing the plans for the day unless D has to work or K has a birthday party. In either case that means I'm off somewhere with K, like yesterday, D had to go in to work. We decided to make the most of the day and set out to Santa Monica for a stroll on the Promenade. We were thrilled to discover that there was an Earth Day Festival going on, it was cool, there were different vendors offering organic food, solar power information, green gadgets and eco-friendly toys. There were animals for the Star Eco Station (where K had recently had a field trip) and a “Sustainable Transport Village” which showcased high mileage and alternative energy cars. It was serendipitous and we enjoyed learning about high speed railways, llamas and fuel cell technology. Then we had gelato, actually K had gelato, I watched her eat it. We walked around for hours and decided it was time to go home after our fourth time petting the llamas, which by the way are so soft.

We came home, dropped on the couch and watched Chef vs City until D came home. I made a light dinner and we had a carpet picnic, which basically involves us spread out on the living room floor eating dinner, another weekend tradition. Today K had a photo shoot for Tralala, a company that she shoots for about twice a year. The owner/designer is a beautiful and talented French woman who adores K's sassy attitude (thankfully), D wasn't working and joined us. He never gets to see K in action, and while this wasn't one of the big productions that we usually end up doing, it's one of our favorite. I like to call it "guerrilla modeling" because they usually just set up and shoot, no specific shot list or set location. Today we were smack in the middle of Orange, a suburb of Los Angeles that has a timeless look to it, with quaint shops and cafes lining the streets. They snapped away while D and I watched them and everyone else watching them, it was quick and painless and at the end K was rewarded with a giant bowl of rocky road courtesy of her designer.

The car ride home was made more enjoyable by the not-so-soft sounds of K singing quite loudly to the kindie rock blasting from Sirius Kids Place Live. We both know every word to all the songs they are currently playing and poor D had to suffer through our off key singing. I actually think he enjoyed it, he's not used to these concerts in the car, for K and I it's how we usually roll. We spent some time together and then K was of to bed.

I know it doesn't sound like much but to me it's everything. I know that D and K enjoy spending the weekend surrounded by friends, and I like it as well. I could have easily made plans that involved lots of other people but I didn't want to. I didn't want to share them, I wanted to spend as much time as we could together, I didn't care what we did. I know that next weekend will most likely be filled with a lot of running around and most likely a huge budget photo shoot which is fine, I'm sure D will spend part of working and that's fine too. I have been recharged by the 65 hours that make up our weekend together. I'll be good for a few weeks now.

That's not going to stop me from waiting for the 103 hours to quickly pass after D and K walk out the door tomorrow morning.
Posted by MicheleB at 8:47 PM