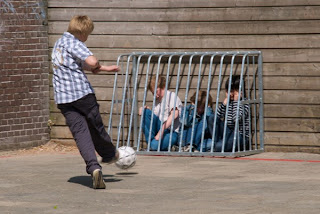 I remember certain things from first grade: my teacher Mrs. Kesting, the lunchroom and by best friend who lived down the street. I remember playing with classmates who were all kids from my neighborhood. Quiet, friendly, idyllic. Nothing really sticks out in my mind. K's school is kind of the same, a small quiet little school where mostly everybody knows each other. The kids know each other as well and we rarely go anywhere without seeing a friend or two. They have playdates together, take the same dance, karate or gymnastics classes and go to the same doctor's office. When we have a problem we discuss it with each other because it's a nicer way to handle things. We email and text each other if we are running late and need to relay a message to our kids or have someone wait with them while we find parking.

I'm sure you get it, it's a great school.

At the beginning of this year K told me about a girl that wasn't too nice and never had her own snack. This girl would force the other kids to give her their treats and if they didn't comply she would threaten to tell the Principal. K was almost in tears when she told me this one day after I asked if she had finished all her snack. I was really just trying to make sure she didn't throw it out, that bugs me. She said that if she was nice to this bully girl and shared her snack the girl, M, was nice. I didn't like this at all and I told K not to give her anything anymore. "But she's gonna tell on me mama!!!" said my little girl, with actual fear in her voice. "I'm going to get sent to the Principal's office, the Prin-ci-pal!!" I found that funny for some reason. She did not. I then explained that surely the principal of her school had better things to do than listen to same tattletale bully narc on her classmates, especially when they did nothing wrong. I assured my scared first grader that even if she was sent to the office and I was called in I would raise holy hell and let them know what was going on. K felt better knowing that she wasn't going to get in trouble with me, I think she was still worried about what the principal would think. I remember worrying about stuff like that too, it seems so ridiculous now but try explaining that to a 6 year old. I think I even wrote about this bully stuff before. It drives me crazy to see anyone make my daughter feel bad, I don't care how old the culprit is either. I'm not above telling off a child.

So time goes by, we receive daily accounts of the havoc M wreaks on the schoolyard, some of it seems a little far fetched but after listening to the other parent's talk I believe it all. I see it too, she's a clever one, always trying her best to avoid bullying in front of a grown up. Can't fool me though, I still have some 6 year old logic left in me, I don't like to get rid of things sometimes. I've confronted her face to face and she just looks right at me and lies. Impressive technique too, she does the sad puppy eyes and the "who me?" expression. Sorry kid, I ain't buying. The other moms are at their wit's end as well, yet nothing changes. The ones that have brought it up to M's parents always get a "I'll talk to her about that" but the bullying only gets worse. We have taught the kids to stick together, M really hates that which makes it even more effective.

Last night I emailed K's friend E's mom to confirm the next day's platydate, she said that E had soccer practice and would have to cancel. No biggie, I said we can reschedule next week. Then she asked if I heard about the day's drama. I had heard a bunch of the day's stories but no drama, and K was already asleep, I told her I had not hear anything but I hope everything was OK. She said there was drama involving M,E and K. Apparently M was picking on E again and using K to be mean. I felt the blood boil, this little sociopath was crossing the line. She said that E was fine, she knows that K is her friend and both girls know exactly what kind of girl M is. I know this, I have spent hours with K teaching her about people and why sometimes people do bad things. I have sat down with K and E together to show them how they can empower themselves and stick up for each other, I think it's important to start teaching kids at a young age not to be afraid to stand up for what is right. In fact we decided to keep the playdate and let them work it out before tag teaming them into another lecture from us. I understand that sometimes K has no choice but to play with M in a group situation. I understand that K will still be nice and polite because that's the way she was raised and I understand that I cannot stop M from following K around and trying to be her friend. I cannot understand selling your friends out to the enemy in order to avoid the punishment.

I spent a lifetime doing that and I will not sit idly by and watch my daughter do it. I sided with Evil Stepfather and punished my own father in order to appease my bully, K was not going to do the same thing to anyone in her life. When she woke up this morning I asked her what happened. After asking about fifty more times she finally told me. She knew it was wrong and she felt terrible, I asked her how it would feel to be in E's shoes and she felt even worse. She was supposed to go home with E afterschool, did she think that was still going to happen? That was punishment enough, I said the first thing she needed to do when she saw E was to give her a huge hug and her very best apology. I'm not one to force apologies but this one was warranted.

I told K that E still wanted her to come over and after hip hop she could go to E's house. She was grateful for that. Today I happen to be around school at dismissal time. I parked my car and made it to the gate by the bell. When K's classroom door opened I could see the look of disappointment on her and E's face, surely I was there to take K home. I gathered the girls and took them away from all the other kids. I asked E if she was OK after yesterday's mishap, she was. I asked her if K apologized for it, she had. I asked if they were still both excited about their playdate. They certainly were. I kissed them both goodbye and went on my way. I saw M eyeing me suspiciously as she walked out of the classroom, alone.

I needed to be sure things had been worked out and I wanted both girls to know that they were loved and their feelings were always going to validated. By now they are most likely abusing E's little brother who is loving every minute of it.

I wish I had someone teach me to stand up for myself when I was young, I wish I had the knowledge that someone always had my back. That I was worth the fight. In the long run it was me who filled that role. Since I'm so good at it teaching these lessons to K is actually easy. She has the hardest role in letting me. When she said goodbye to me on the playground I could see the relief in her face and the gratitude in her eyes. She'll get there. I'm a nice teacher but I'm tough and I give lots and lots of homework.
Posted by MicheleB at 2:51 PM