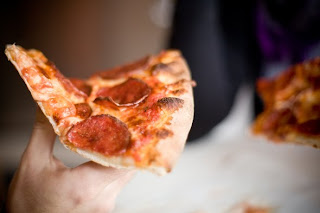 I had a stressful week (like always) and it culminated with news that I didn't want to hear about a job K was booked for on Sunday. A job she wanted to do badly because she would be with her friends, she was released and I had to tell her. She was actually OK with this news, I was not. For a second I turned into a scary stage mom, how could they release her? Seriously, she's amazing, what the hell is wrong with these people? I even emailed K's agent. Then I got over it, who needs another day on my feet and pictures I'll never see. As long as she wasn't upset I was OK, the reason I was excited about this particular job besides the fact that it was on a Sunday and K's friends were on it, I love the mom of one of the girls and I never get to just sit and chat with her. It would have been fun for both of us. Oh well, on to the next.

When I told D about it, he told me to chill (I did) and not to get emotional about it, he understands that I do a lot of work getting K around town and I like to see a payoff. Like I said, I got over it. K and I went to buy a birthday present for a party tomorrow I almost forgot about. At the store I bought the boy some kind of toy that boys around 7 like, I forgot what these things are called but I was assured they are popular. Then K saw a doll that she always wanted, a Moxie Girl, made by MGA to replace the scarily slutty Bratz dolls. She was kind of cute, she wasn't dressed like a skank and she looked just like K. Plus she came with removable hair and had glasses. "Please, oh please mama!!! I always wanted her, remember???" Yes, I remembered and I still felt bad for the job thing so I bought it for her. I was actually going to buy it for her during the holidays but I had bought her so many dolls I really didn't want to get her another one. Besides, she was really cool and on sale.

As soon as we got home she drew pictures of "Sophia" and wanted badly to dress like her for our Friday night dinner. Dinner, crap I actually forgot about that. Thankfully we stuck to our Friday night out tradition. When D came home I figured we would have the usual "where are we going?" conversation but all he said was "do you mind a bit of a drive?" Oh does that man know the way to my heart or what? I knew that he meant a drive into Hollywood to Vito's, my New York pizza joint. D knows that when I get upset, even if it's over something stupid, the only food that will comfort me contains a high percentage of carbohydrates. Pizza does that for me, not any kind, it has to be good, it has to be authentic and it has to be Vito's, a place I found after extensive research and taste testing.

So off we went to Hollywood, home of our pizza haven, and it's not just me who craves this place, K will eat anything that is placed in front of her at Vito's. She will easily eat two slices, it might not seem like much but for a kid that doesn't eat anything without refined sugar it's monumental. I felt better earlier but I instantly felt at home as soon as I walked through the door of my tiny slice of heaven in Los Angeles. We sat, had some wine, beer and lemonade (our respective drinks of choice) and waited for our food. We discussed the events of the day, in our house and the world. We watched K tell our waitress our life story and her weekend plans, which include a Grilled Cheese Festival (no I am NOT kidding ) this prompted a huge discussion in the restaurant and K was proud to be the source of such valuable information. After eating a mountain of pizza she wanted more and asked for some fresh melted mozzarella on top of her cheese slice. I think the Food Network is rubbing off on her, adding fresh buffalo mozzarella to pizza is devine and something I will order on our next visit.

As we were winding down from our dinner, I felt the relaxation take over me, something I usually can attribute to the wine but since I only had one glass and two slices of pizza I can say it came from the food and the company. A cheesy carbfest with my family is the perfect end to a long week and one of the things guaranteed to put a smile on my face.

Since I banned carbs from my diet things like pizza became a treat instead of a staple, good thing too, because if I had discovered Vito's before my carb ban it would have been impossible to lose weight. It was easy before, the pizza options here on the Westside are poor and that's being nice. Not that it mattered, I still had it plenty of times. It's like that saying "there's no such thing as bad pizza," unless of course you're from New York, then it's more like "there's no such thing as good pizza in Los Angeles." I can't believe how many carbs I have wasted on bad pizza, I wonder if it really made me feel better, maybe that was the wine!

It doesn't matter, we've found the place that makes us happy and since we don't go very often it's always a treat. The fact that it's fantastic makes it a perfect treat and D, K and I each have different reasons for loving it. It's the one place that we always agree on and every time is wonderful. It's not just the good food, it's a small intimate place and everyone there is friendly and happy. It feels like I'm back home in New York with my husband and daughter, something that has actually never happened.

When I'm running on empty and need a jump start this is the place for me. It's also the only time I will never complain about putting un-pure food into my body, in fact I usually have more carbs in one meal at Vito's than I do in a normal week.