Hanging with my peeps 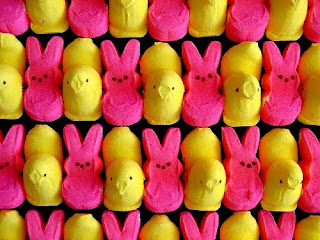 So last night I made a Spring cake for K and tonight after dinner we decorated it. I wasn't sure what we were going to do but I knew that it would involve Peeps. I don't necessarily like them all that much, I just think they're super cute and we bought a bunch at the store yesterday. At first I wanted to keep them together and line them up around the square green cake but D said I should mix it up so I stepped out of my linear comfort zone. I put some pastel M&Ms in the bottom half of small plastic egg and circled the Peeps around it, I called it the Peep Last Supper.

It was getting kind of late and I wanted K to get a good night's sleep but she wanted to share the cake, so she and D went to invite our neighbors, S and K, a married couple she absolutely adores. S has been in India for a few weeks and K wanted to give him a welcome home picture, she missed him. On the way they invited A and her son J who is the exact same age as K. They get along really well and are very compatible, they don't play that often but when they do it's fun to watch, they are adorable together. K came running back in to tell me that everyone was going to come and have cake, she was thrilled, I was worried, she'll never be in bed by 8. I also am trying desperately to get over my "last minute visit" phobia. I don't know why this is even a problem with me, my house is generally clean, I always have more than enough food and I like my neighbors, at least the ones that were about to break cake with us.

Within a few minutes we had a full house, our other neighbor and K's sometime babysitter D came by as well. We all sat in my living room eating cake, listening to music and having wonderful conversations. S told us about his trip to India, and the album he recorded there, it was so cool to listen to his stories about recording and filming all over India. K and J got bored with cake and went off to her little table to draw and have their own conversation, they are both type A kids yet they play off each other nicely, there's no fight to be the Alpha Kid. We did want to get them to bed so we started to wrap things up, about 20 minutes later our living room emptied and it was just the three of us. I'm usually happy when everyone leaves my house, I was bummed that we had to cut it short. I like the company and energy of other people, I think I get this from K. Ever since she learned to talk she has been asking to invite people over or asking if we can visit someone. She loves our friends, sometimes I think, no actually I know that she believes that they are her friends and we just have to drive her.

Last Sunday, after a long day some friends invited us over to play Wii Golf. I really needed a rest and D did too but once K heard about the invitation he knew he was going to have to take her. They were both having fun when I texted D that I was going to make dinner and was wondering when they would be returning. He said that K was in the middle of her game and I told him to take his time. I know better than to remove K from a good time. Apparently it was more than a good time, she showed a room full of Wii golf geeks a move that not only worked but improved all of their games. I am not kidding, apparently they now call this move the "K Pause," I'm so proud.

I think K has made me more social, that may be part of the reason that we take her everywhere, well that and the lack of available babysitters. OK, the lack of babysitters I deem worthy enough. Our friends must think this too, on many occasions we are told that K is the only kid that's been invited to our friend's parties or events. "She's one of us" is what we hear. Last week while K was on her sleepover at J's house A's husband took the girls out for dessert, he came home and told A that he loves talking to K, she's the only kid he knows that can participate an actual conversation. This isn't the first time I've heard that.

While I was kissing K goodnight she said she was sad because everyone left. I told her that she should consider herself lucky that we were able to have a room full of people at a moments notice. She asked if we're going to see anyone this weekend and I said of course, don't we always? D has always been like this, always on the quest for a good plan while I was happy to do nothing. Not anymore, I was thinking of making a golf cake and bringing it to our Wii playing friends, partly because I have so much green fondant but mostly because I think it will be fun to visit.

Besides I want to see this "K Pause" in action.

On a side note, we had a bunch of extra Peeps leftover so we roasted them on the stove. If you have never done this before immediately go buy some and do it. Seriously, it's like a marshmallow crème brûlée. Is there anything you can't do with a Peep?
Posted by MicheleB at 9:11 PM